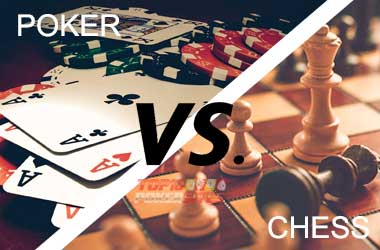 This article explores the similarities and differences between chess and poker. Read to know if you need similar skills to play both games.

Differences Between Poker and Chess

Although many people enjoy playing recreational poker today, the game started as a form of gambling with negative connotations. Today, it is a mind sport, and many players have become millionaires participating in prestigious live poker events. On the other hand, chess has always been a game of the intelligent. It has always had a flawless reputation.

In truth, both games use the same skills. The best chess and poker players use strategies to exploit the weakness of their opponents.

But playing poker always requires luck, unlike chess. You will never become a successful chess player without skills, although you may need to be lucky to win a few games. For instance, you may win a round of chess if you are lucky enough to have a weak opponent who makes a lot of mistakes. But you may win a game of poker without skills if luck is on your side, something that can never happen in chess.

Let us now look at the basics of playing chess and poker to understand the two games better.

Poker players try to defeat their opponents using math, luck and representation. They aim to make their opponents feel complacent enough to bet their chips. You have four moves to choose from—raise, fold, call, or check. You can win only if you understand your opponents perfectly.

Each poker player responds differently to different game situations. As a result, poker matches are competitive and ambiguous. Since players have to make decisions based on incomplete information, they reach different conclusions and make different moves. Poker is a game of luck, intuition, and skills. Predicting your opponent’s move is a challenging task.

Poker is a complex game because people react in infinite ways. Even a beginner who is not using advanced strategies can react in different ways to one game situation. You have to play with the same opponent several times to understand his or her response to various game situations.

The goal of a chess player is to capture the opponent’s king. The game can accommodate only two players at a time. Unlike poker, chess is a game with no ambiguities. So your chances of winning are heavily dependent on skills. You win if you create a proper plan and set traps for your opponent.

But setting a trap for your opponent is difficult because chess is a game of complete information. Both players can see what is happening on the board. Experienced chess players may have to make several moves before accomplishing their goal, and throughout the process, they have to predict their opponent’s next moves.

Chess is a game of calculation, not intuition. Players have to calculate their moves and adapt to changing situations during the game. Although all information is on the board, chess is a complicated game because you can make a move in 500 ways, each move leading to more variations. You will win the game if your computing prowess exceeds your opponent’s.

Poker and Chess are Mind Sports

The IMSA recognized poker as a mind sport at a 2010 congress hosted in Dubai. Both chess and poker are mental games requiring thought and analysis. Players need to think ahead of their opponents to win the game. The difference between the two games is in strategy implementation and player reaction.

Since chess presents all information on the board, players have to use strategies based on thinking ahead to win the game. You have to look ahead as much as possible to devise better plans to defeat your opponent. Things get complicated when opponents see through your plans and prevent you from executing them.

The only difference is that poker relies more on luck, while chess relies on exceptional computing powers.

Both chess and poker require luck, but in the case of both games, skilled players emerge as the winners.

Sometimes, players have a good day and perform better than usual. Although this luck factor impacts the results of a game, it does not play a significant role in both games.

While people are under the misconception that chess requires only skills and poker requires luck alone, such is not the case. Sometimes, players enjoy luck, which gives them an advantage over their opponents. However, the significance of the luck factor diminishes as you play more games, and the player with the sharpest set of skills wins consistently.

For example, if you play poker with your friends, you may notice that most of them are incapable of taking advantage of the best hands in the game. This happens because they do not have the required set of poker skills. You may get strong hands because you are lucky, but you can use the strong hands to your benefit only if you have skills.

Chess players believe that the results of their game depend on skills alone, but this is not always the case. You will win a game of chess if you have better computing skills. But you may also win if your opponent makes a mistake, and sometimes, even the best chess players make mistakes.

The perfect chess game will always result in a draw. If chess is based on skills alone, chess championship matches should have always ended in a draw. A lucky chess player is the one whose opponent made a mistake that helped him to win.

Easy to Learn, Hard to Master

Both chess and poker are easy to learn, but poker is harder than chess to master. Although chess is a complicated game, the ambiguous nature of poker makes it a game that continuously evolves and changes, forcing players to acquire new skills and learn new strategies. The best poker player of today will become mediocre in the next ten years if he fails to work on his skills and adapt to the evolving nature of the game.

Chess players spend their entire lives trying to master the game. However, once you acquire the required skill set, your skills remain relevant throughout your life. For example, the American chess grandmaster Bobby Fischer retired from the game twice, but became a world champion each time he returned.

Students of chess use Fischer’s game history to improve their skills and become better players. This is possible because chess neither changes nor evolves. The game has remained the same for more than a century and will remain the same for many more years. Your chess skills are, therefore, relevant for as long as you live.

If chess ever changes or evolves, the changes take place over centuries. You can, therefore, use older chess games to improve your skills if you want to become a chess master. On the contrary, poker is a fast-evolving game. The best poker players of ten or twenty years ago are outdated today because they played games differently from how we play poker now. They used strategies that are no longer relevant.

Unlike chess, you cannot use a poker game played half a century back to analyze hands, acquire skills or become better at the game.

Conclusion – Which Game to Play (So which Game Is For You?)

Both chess and poker help improve your mental abilities, computing skills, and the ability to think ahead.

Poker is a game for players who love fast-evolving games offering plenty of opportunities to win money. Chess is for players who prefer straightforward games that require you to think ahead and use your computing skills.

Although both are great games, the better game for you depends on your personality and skills. In the end, it all comes down to how well you play ‘mind games’ and if you can manage to keep a ‘poker-face’.