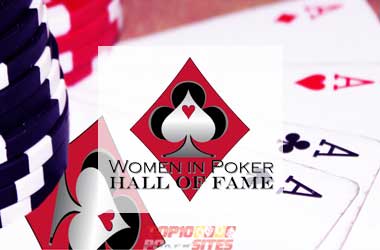 The Women in Poker Hall of Fame has announced the final seven after fans submitted their nominees for who will compete for the honor this year.

Selbst, Boeree, and Bicknell (who is now married to high stakes poker pro Alex Foxen) are all in the top 10 of the women’s all-time money list and are considered among the world’s best female poker players.

Vanessa Selbst is currently ranked No.1 with more than $11.9 million in total live earnings, while Kristen Bicknell is at No. 3 having amassed over $5.6 million in tournament cashes throughout her career. Liv Boeree sits at No. 7 with $3.8 million in live tournament winnings.

Jennifer Tilly is well-known for being the first celebrity to win a World Series of Poker (WSOP) tournament. She won her maiden bracelet in a Ladies’ Event in 2005. Tilly, who is also an accomplished actress, also frequently appeared on old-school cash game shows.

Kara Scott will be most recognized for being a poker broadcaster, presenting the WSOP on ESPN. She also served as a host for various poker TV shows such as High Stakes Poker and Poker Night Live. She is currently an 888poker ambassador.

King is a poker veteran and historian with experience spanning nearly five decades, making her one of the pioneering women in the game. Fans of old-school poker would remember her as the winner of the 1978 WSOP Ladies’ event. She was among the first female poker players to deal the Main Event.

Hael made her first foray into the world of poker working as a dealer. Now, she is the VP of Global Tour Management at World Poker Tour. She’s been with the premier poker tour brand for more than a decade and won the GPI Industry Person of the Year award in 2018.

Induction Ceremony to be Held on December 14

The 2022 inductees will be selected by a voting panel consisting of living members of the club as well as media personalities. The public will also have a say in the selection process as they are allowed to vote for their favorite female players and industry figures. Public voting closes tomorrow, October 14.

From the seven finalists, only three will be inducted into the WiPHoF this year, and they will be announced in November, with an induction ceremony to follow on December 14 at the PokerGO Studio at Aria Casino and Hotel Las Vegas.