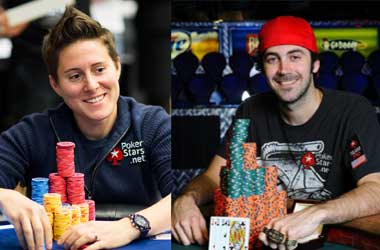 Poker pro Jason Mercier’s successful run in this season’s World Series of Poker (WSOP) has brought him a lot of acclaim as Mercier has already won two bracelets and narrowly missed out a third bracelet when he finished in the runner-up position. The winning streak has also attracted a lot of attention due to an audacious bet he has with fellow player Vanessa Selbst.

Selbst entered into a bet of with odds of 180-1 on Mercier winning three bracelets in this seasons WSOP. So if Mercier wins his third bracelet, Selbst will need to pay him $1.8 million else he pays Selbst $10,000. The bet took place in January this year while they were at the Poker Caribbean Adventure.

Selbst has a similar bet with Polish poker pro Dzmitry Urbanovich for $2 million but that is not of much concern since Urbanovich is a relatively inexperienced player and is no very likely to win three WSOP bracelets. Mercier’s WSOP successes are however likely to cause Selbst serious worries.

Selbst has in fact expressed regret at entering the bet and has attempted to buy out Mercier twice. She stated that she was in an inebriated condition at that time of the bet and was now not keen to continue. Selbst offered Mercier a buyout offer of $100,000 after Mercier won his first bracelet but he turned it down and preferred to stick to the original bet.

The bet was not public until Mercier talked about it after winning the 2-7 Draw Lowball No Limit Championship. Selbst subsequently took to Twitter to clarify and present her side of the story. She indicated that Mercier was not being compassionate by refusing to accept her buyout offers and making the bet public.

Mercier responded to Selbst’s claim saying she that must take responsibility for her actions regardless of having been drunk or not at that time. The exchange has resulted in a Twitter war with some saying that Mercier should not have taken advantage of Selbst while being drunk whereas others claim that Selbst was trying to publicly shame Mercier into accepting a buyout and reducing her losses.

With Jason Mercier just one bracelet away from winning the bet, the conclusion to the dispute remains to be seen. His loss in the $10,000 Seven Card Razz Championship against Ray Dehkharghani has been attributed by some of his peers to the stress from his prop bets. So far only five players have won three bracelets in one WSOP season: Jeff Lisandro in 2009, Phil Ivey in 2002, Phil Hellmuth and Ted Forrest in 1993 and Puggy Pearson in 1973.