Poker Pro Antonio Esfandiari Gets Kicked Out Of The PCA

Poker Pro Antonio Esfandiari Gets Kicked Out Of The PCA 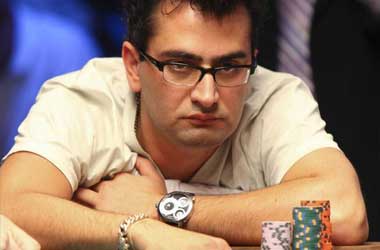 The PokerStars Caribbean Adventure (PCA) was the first major poker tournament of 2016 and attracted some of the biggest poker players in the world including poker pro Antonio Esfandiari who has a great reputation on the poker circuit.

The Hendon Mob lists Esfandiari as the second highest ranking poker player on the all time money list with over $26 million in career prize money. However Esfandiari will wish to blot out his antics at the PCA 2016 as event organizers had to eventually disqualify Esfandiari from the $5,300 main event due to improper behaviour which is very unlike Esfandiari.

Apparently Esfandiari and businessman Bill Perkins who also players poker got into a bet that required Esfandiari to lunge everywhere he went for a period of 48 hours. The bet started on the 8th of January and was for a very large amount, an amount that Esfandiari did not want to disclose to the public.

Before the main event at the PCA could start, Antonio Esfandiari tweeted

Been LUNGING around my hotel room all day. Just going to the bathroom and back is starting take a toll on my legs. I am in trouble tomrw!

It looks like the lunging took its toll on Esfandiari who decided to avoid going to the toilet while at the poker table and came prepared with a can. He relived himself twice at the table before somebody found out what he was doing and reported it to the event organizers. His behaviour came as a shock to many including the tournament directors but in the end they decided to cut his main event short and send him packing.

In a statement, Eric Hollreiser, head of corporate communications for Amaya Inc, the parent company of PokerStars said

Following a violation of our tournament rules for players participating in the PCA, Antonio Esfandiari was disqualified from the main event. We do not expect to provide any further details on this issue.

Esfandiari would later apologize to his fans on twitter and say that his actions were unacceptable but would also go on to confirm that the size of the bet was massive and in the end he ended up winning the bet.