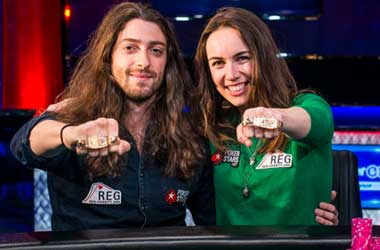 Liv Boeree and Igor Kurganov have cut ties with PokerStars. The poker couple announced in a tweet this week that they are leaving the brand after a combined 10 years of representing the brand.

Boeree and Kurganov have become the latest high-profile pros to end their relationship with the online poker giant, as the company continues to undergo an extensive overhaul. Both players thanked PokerStars and the people they worked with for all the wonderful experiences during their time at the company.

Liv and I are splitting up…
It’s been some fun couple of years and I’m thankful for the experience, the great support to https://t.co/euvfWZIdSN and the people I’ve worked with.
Sorry, splitting up with Pokerstars, not Liv, but all the above is true for both!

It's been an amazing nine years but now it's time for @PokerStars and I to part ways. I want to say thanks to the incredible staff and my fellow team mates for all the wonderful memories, will miss you all! pic.twitter.com/RfRIbMwQaf

Boeree joined PokerStars back in August 2010, following her massive victory at the European Poker Tour (EPT) San Remo where she won a whopping €1.25 million. Since then, Boeree has taken part in major international tournaments all over the world as a PokerStars-sponsored pro.

During the 2017 World Series of Poker, Boeree and boyfriend Kurganov took down the $10,000 Tag Team No Limit Hold’em Championship, earning each of them their first gold bracelet. Earlier in 2017, Kurganov also signed on as a PokerStars ambassador.

Both players are among the most successful poker players in the world, with Boeree racking up more than $3.8 million in total live earnings in her career. Kurganov meanwhile is frequently seen in the high-roller tournament scene, winning massive cashes. The Russian player is currently at the top of his country’s all-time money list, with total tournament earnings of over $18 million.

Following their exit from the red spade, both players will most likely keep themselves busy at live poker tournaments but Boeree did reveal that she plans on shifting her focus on public speaking and effective altruism content. Kurganov, who has been running hot in $25K-$100K tournaments this year, is expected to stay active in the high-roller circuit.

The latest departures of two of poker’s most prominent players reflect PokerStars’ decision to change its strategy in relation to its roster of ambassadors. In the past, PokerStars made sure it had a world class team that consisted of some of the biggest names in the game including Daniel Negreanu, Chris Moneymaker, Barry Greenstein, Jason Mercier, and Joe Cada.

In May 2019, Negreanu revealed he was parting ways with PokerStars in a surprise video announcement on Twitter and video blog on youtube (shown below).

The Canadian poker pro served wore the red spade logo for 12 long years. Moneymaker is now the only season player left in the list of PokerStars ambassadors.