888poker Ambassadors Hit The 2018 WSOP And Begin Cashing Out

888poker Ambassadors Hit The 2018 WSOP And Begin Cashing Out 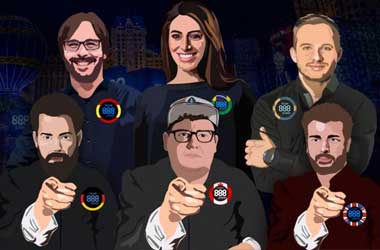 888poker and the World Series of Poker (WSOP) have a history of creating magical moments in Las Vegas.

The 888poker crew has once again turned up at the 2018 WSOP to see if they can leave their mark and walk away with sacks of cash.

After the success of last year’s 8-Team WSOP Promo, 888poker has once again sent its best poker players to the 2018 WSOP in teams to try and outlast each other in the tournament.

Saliba and Sweden poker pro Sofia Lövgren are just wrapping up at the 888Live Barcelona and will be heading to the WSOP after the Main Event. Many are expecting huge things from these two ladies since Saliba made a nice run at the 2017 WSOP with five cashes, and Lövgren was able to cash last year at the Main Event in 322nd place.

2014 WSOP Main Event champ Martin Jacobson is also coming back for another jab at the Main Event title, after having secured a free seat to the event by winning the 12,600 package to the 2018 WSOP Main Event from 888poker’s online satellite event. According to Jacobson, he will be preparing for a summer grind this season, and plans to play as many No Limit Hold’em events as possible.

Team UK 888poker ambassador Chris Moorman was also playing at 888Live Barcelona but decided to skip the Main Event as he wanted to show up early to the WSOP. He has not wasted anytime at the WSOP and has already cashed out after he finishing in 17th place at the Event #3: $3,000 No-Limit Hold’em Shootout. The UK poker pro is just warming up and has his sights set on another WSOP gold bracelet, probably from the six-max events or the online WSOP.com events.

In a statement, Moorman said,

I’m looking forward to all the six-max events. I feel really comfortable in six-max, I have a good track record in it. You can get a little more creative and you don’t have to just cooler people. And I’d love to get an online bracelet just to compliment my online history. It’d be nice