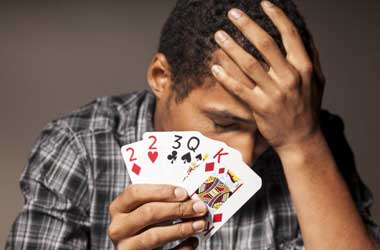 According to poker math, probability and combinatorics, there are 1,326 possible combinations for the opening hand in Texas Hold’em.

If you exclude the suits with no particular value in this poker variant, for example, a Queen and a King of both clubs and hearts are of the same value, there are 169 different hand combinations for a starting hand.

Out of these, which is the best? That’s easy. Two aces. The pocket rockets have enough firepower to make you the winner of the round one-third of the time. However, what’s that hand you always need to fold?

Stay tuned as we explore the worst starting hands in Texas Hold’em and the reasons why you should dump them straight away.

Almost 71% of all hands are offsuit, meaning they contain cards that are of different suits as well as ranks. Among these, no combination has had greater notoriety than the 2-7 offsuit combo, and with good reason.

You can’t make a straight or a flush without having to relinquish one of the cards, and if you do, a bigger flush or straight is usually going to take you out. Any of the two-pair combinations you can make will likely be beaten as well.

So, what to do then? Dump the cards right away. It’s a terrible hand, and you must get rid of it.

Does the 2-7 Offsuit Hand Deserve Its Bad Rep?

We have seen why a 2-7 offsuit hand is so terrible. But, in the end, you fold those cards the moment you see them. They don’t cost you much at all.

Also, there’s always a chance that when you start as the BB, few limpers are ready to tag along. Two pairs or a trips in the flop and a strong ace on the table and those poor limpers with a weak ace will make it rain for you even with the 2-7 offsuit. So, when you are the BB, even the 2-7 offsuit hand can give you some berth, much more so when you are the SB and wind up with that hand.

Other Weak Hands in Texas Hold’em

There are plenty of other weak hands in Texas Hold’em that can hold you back. Pun intended. Let’s take a closer look at them and the reasons for the animosity.

With 2 and 8 offsuit hands, your position is only slightly better than with the 2-7 offsuit. The only improvement is that an 8 is better than a 7. Other than that, you are not better off at all. 8 is still not a very good high card, and any pairs will likely be beaten.

With this combination, you can’t make a straight, only weak pairs, so fold this combo as fast as you can.

Pairing a 9 with any cards from 2 to 4 is only good as long as your nine can hold water. You can’t make any pairs because of the gap between the two cards, and anyone having pocket 10s or above will get the better of you.

Let’s, for a second, forget that Doyle Brunson won two World Series of Poker bracelets with this hand. It’s still an awful one. You can’t make a straight, a flush, or even a pair with good odds of winning.

Speaking of odds and percentages, the win percentage with this hand is 4.90%, which effectively secures it a place among the worst starting hands in Texas Hold’em.

How You Play a Hand Matters Most

The hands we mentioned earlier are worthy of going straight to the bin on any day, but one thing is certain — the worst starting hand in Texas Hold’em poker is the one you play the worst. How so? Easily. Poker is a game of skill, nerves, luck, and multiple other factors. The situations that arise from these starting hands can hamper your further play by throwing you off your footing and concentration.

Imagine getting a K-Q combo. On the look of it, a great hand, but what will you do when an ace comes knocking? You need to learn to control these stressful situations to get the most out of these terrible hands.

Statistically, which starting hand in Texas Hold’em is the worst?

Looking at statistics and math, we can see only one candidate for the worst starting hand in Texas Hold’em — the 2 and 7 offsuit. There are no flush or straight draws, and the pairs that can come from it are very feeble.

What should you do when you get a 2-7 offsuit hand?

Flop it right away. Mucking these may even save you some money in the long run.

What are the win percentages for the 2-7 offsuit hand?

If you want to test your luck and go against players with a 2-7 hand, your win percentage won’t exceed 4.6%.

What is the best opening hand to have in Texas Hold’em?

Two aces make up the best possible opening hand in Texas Hold’em. If you look at the numbers and stats, you will win 30% of betting rounds with these two hands.