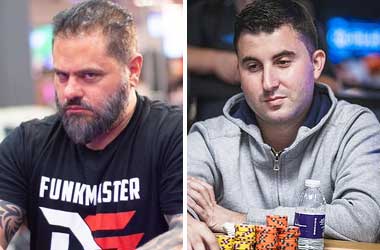 Hustler Casino Live (HCL) owners Nick Vertucci and Ryan Feldman have now retracted their earlier statement regarding their show being granted approval by the California Bureau of Gambling Control (CBGC) to continue its YouTube live-stream while an investigation into cheating allegations is ongoing.

The pair has clarified that it was the venue, Hustler Casino who had been in contact with the CBGC and not them. Vertucci and Feldman also made it clear that CBGC is already aware of the alleged cheating incident on September 29 but has not approved anything.

An investigation is currently underway into cheating allegations arising from the controversial hero call involving Garrett Adelstein and Robbi Jade Lew which has been a hot subject in and outside of poker in recent weeks.

During the hand in question, Lew stunned her fellow players including Adelstein himself when she made a bizarre call that saw her scoop a six-figure pot. She returned the money to Adelstein but the latter accused her of cheating which Robbi Jade Lew has vehemently denied.

Wanted to be clear Hustler Casino is in contact NOT HSPP. pic.twitter.com/CL4YF4Zwpz

We are once again putting this out to be clear. We have had numerous questions asking if we HSPP had direct contact. Read below “NO” it is HC who has been in contact.They can update as they see fit going forward. Hopefully this is clear enough. pic.twitter.com/V1m1TDoVWy

HCL has continued on with the show even as the investigation into the alleged cheating incident is still in progress. The stream is still available Monday to Friday beginning at 5 p.m. This has raised some eyebrows among some members of the poker community who think HCL should temporarily stop the show.

Matt Berkey, who has been on the show numerous times in the past, criticized Vertucci and Feldman for deciding to proceed with the show even after one of their employees admitted to stealing chips from Lew during the incident. The poker pro believes HCL should pause the show and fix its security failures first before resuming operations.

Explaining why HCL continued to live stream after the controversial poker hand involving Adelstein and Lew, Vertucci said it was because players continue to trust them and have kept playing. He added that while stopping the show would have a negative impact on them financially, that isn’t the main reason why HCL has continued airing.

Vertucci said it’s still unclear what really transpired during the incident and it would not be wise to believe conflicting stories. Lew has been accused of cheating but nobody can provide concrete evidence to prove that claim.