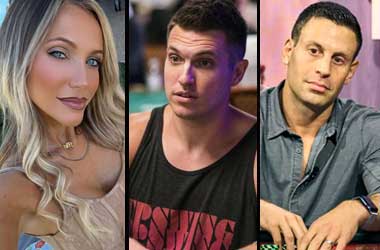 Recent conversations have highlighted the supposed romantic relationship between Robbi Jade Lew and her friend Jacob “Rip” Chavez who played with her at the same table when the incident took place. Chavez was accused of being Lew’s co-conspirator when the alleged cheating happened.

Chavez’s Wife Asks Polk and Adelstein to Leave Her Alone

This week, Chavez’s wife Savannah Hale took to Twitter to express her support for both Lew and her husband, maintaining that the pair did not cheat at the table and in their respective marriages.

Hale also claimed she felt harassed after receiving plenty of messages from several individuals, including Doug Polk and Garrett Adelstein, asking her to “incriminate” Lew and Chavez. Hale hit out at Adelstein, saying he “lost fair and square” and that he must return the money and leave her alone.

FYI to everyone I stand behind husband and Robbi as I know they did not cheat. I’m so tired of being harassed. I have got DM messages from @GmanPoker from @DougPolkVids and others asking me to incriminate them. Garret you lost fair and square give us our money and leave me alone.

In response to Hale’s tweet, Adelstein said it was her who messaged him first. His reply was accompanied by a screenshot of a conversation between him and Hale, which shows the latter saying the scandal was “much deeper than anyone knows“.

Savannah you messaged me first weeks ago. Then this screenshot was sent to me. This is in addition to you earlier liking several posts that were in agreement that I was cheated. I truly empathize with all that you’re going through, but I’m not your enemy here. pic.twitter.com/urYjKTRvpy

Hale later clarified that the comment was not about the alleged cheating scandal. Rather, it was about the possibility of her family being dragged into the controversy.

The convo between us is baseless.. but you didn’t post it in hopes up attention? All I said was it’s deeper than a scandal. The “scandal” has tried to ruin and break up families. Enough is enough. You think I’m going to tell a random stranger the deep hurt and pain

Speculations about Lew and Chavez being involved in an extramarital affair were triggered by an investigative video previously published by Polk on YouTube. The Upswing Poker founder who no stranger to a spat also replied to Hale’s recent tweet, saying it was her who followed him on Twitter and that he only tried to message her to get her views on the incident. He denied harassing Hale and asking her to incriminate anyone.

You tweeted about the incident

I dm'd you and asked for your take. I said I found the current explanation from Robbi unplausible

You said you wanted privacy. I said I'm sorry and did not respond again

I did not harass you or ask you to incriminate anyone

In response, Hale’s husband Chavez called out Polk, telling him to leave her wife alone, regardless if she followed him on Twitter. He said Polk should act appropriately as a “grown man“. He went on to accuse the American poker pro of exposing his wife’s “vulnerability“.

Doesn’t matter your a grown man and you should never be In my wife’s DMs leave her alone and don’t act like your her friend. All you were trying to do is expose her vulnerability. Not cool !

Lew just can’t stay silent on the issue and criticized Adelstein for dragging family members into a dispute that should involve only those who were present at the table when the alleged cheating took place. Lew also expressed her appreciation towards Hale for putting up with the toxicity of drama-driven trolls. Lew’s husband Charles also broke his silence and defended his wife and Hale.