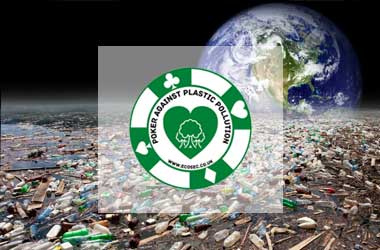 An ongoing campaign to reduce plastic waste at poker events has received a huge boost with more prominent poker tours and rooms getting on board.

The “Poker Against Plastic Pollution” is spearheaded by ECOSEC, a UK company that manufactures environmentally-friendly security tamper-evident bags.

The Poker Against Plastic Pollution campaign got off to a good start, with ECOSEC quickly forming a partnership with one of the world’s leading online poker operators, 888poker. The operator was the first to take part in the campaign and has been utilizing biodegradable poker chip bags from ECOSEC at its live events since May 2022.

888poker’s participation marked the first time that a major poker operator has introduced a more eco-friendly option to players. 888poker executives see the partnership as a “win-win-win” for the company as it strives to achieve net-zero carbon emissions by 2030.

ECOSEC has so far got rid of 400kg of traditional plastics at live poker events and planted 640 trees as part of the campaign. The new partnerships involving Grosvenor Poker, the Irish Poker Tour, and Fivebet will take things up a notch and ECOSEC CEO Karim Louis couldn’t be happier.

Louis said the campaign has had an “unbelievable start” and they’re looking forward to welcoming more poker operators across the globe as they continue to create a sustainable environment for poker.

Grosvenor Poker already used ECOSEC’s biodegradable bags at the Goliath tournament series, one of the biggest live poker festivals held outside of Las Vegas. The poker operator has also been using reusable water bottles at its live events even before joining the Poker Against Pollution campaign.

Its partnership with ECOSEC further establishes its commitment to environmental sustainability, with Luke Hobbs, Poker Marketing Manager at Grosvenor Poker’s parent company Rank Group describing the alliance as a “no-brainer”.

ECOSEC plans to roll out its biodegradable bags globally, partnering with various entities in strategic locations so it can compete on price. The company will also come up with more biodegradable products for poker in the future, such as coin bags and money note wrappers.