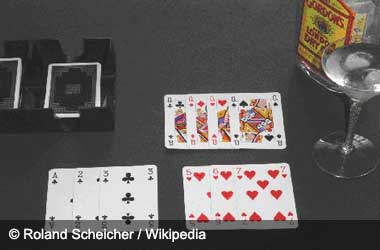 Gin rummy (also just called gin) is a two-player variant of rummy with the goal of collecting more points than your opponent.

If you’ve already played the classic version of rummy or some of its popular card game variations, you’ll learn to play gin in a jiffy.

The games share some basic rules and principles, so there’s no steep learning curve to worry about.

Let’s make a quick rundown of things you’re going to learn in this article:

But even if you’re unfamiliar with these games, don’t worry, as we’ll make sure that you understand everything about gin rummy by the time you finish reading this article.

Gin rummy uses a standard 52-card deck (no jokers) and can only be played between two players.

The goal of the game is to win more points than the opponent by making melds, divided into runs and sets: 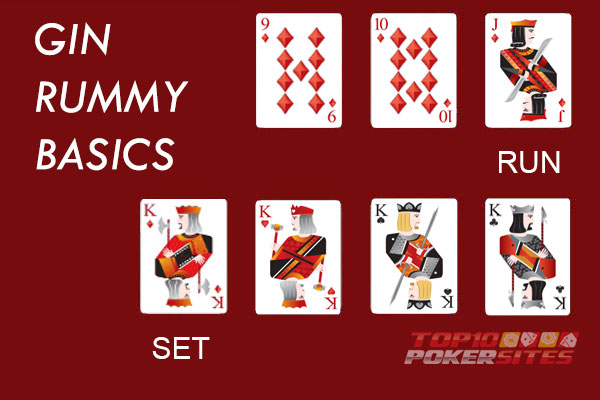 Picture cards are worth ten points, the ace is worth one point, and all other cards carry their face value.

At the start of the first round, each of the two players draw one card each. The player with the lower-value card starts as the dealer, and whoever loses the round must take on the dealer’s role in the next session.

The dealer’s task is to shuffle and deal ten cards each to themselves and the opponent, dealing one card at a time to each side. Once the cards are dealt, the dealer discards the top card from the remaining deck and places it face-up at the center of the table, thus starting the discard pile. The remaining pile (the stock) is put face-down next to the discard card.

The play continues until one player knocks or declares gin by putting the card face-down on the discard pile. 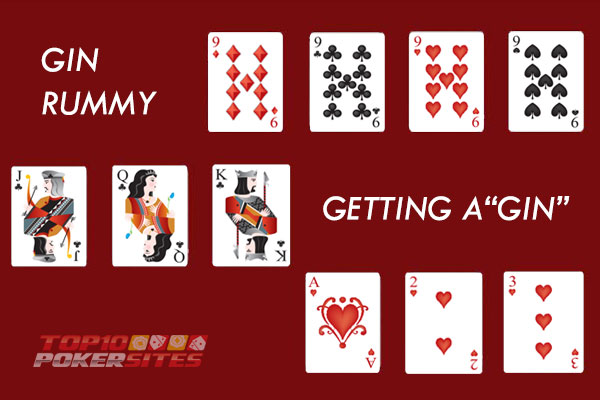 Mind that a single card can’t be a part of a set and a run simultaneously. The player must decide in which meld they want to include that card.

A player can also knock when not having all ten of their cards be part of a set or a run, in which case they place their cards face-up on the table. However, their deadwood (unmatched cards) must have a value of ten or lower. The opposing player then lays off their cards to complete sets and runs in the knocking player’s hand.

End of the Round

Once the round is over, the players receive points based on the system explained below.

The player who goes gin receives points equal to the value of the opponent’s unmatched cards, called deadwood.

Once one player knocks and their opponent lays off all cards they can possibly lay off to the knocking player’s hand, the value of the remaining unmatched cards in each of the players’ hands is compared:

Each player then gets 20 points for every hand they’ve won. If the game is played for money, the loser must pay the winner according to the difference in their point value.

Gin rummy is a fun two-player card game that requires plenty of skill, including memory and various tactics. Of course, luck is also a factor, as you never know which cards you might receive.

If you master the game well enough, you can up the excitement by playing it for real money, although gin can be exciting enough when played only for fun. While at top10pokersites.net, you can read our other guides and learn to play poker, and other card games.