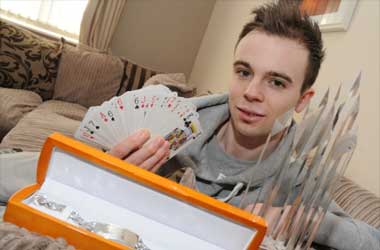 Many poker players say that it takes years of poker playing experience to master the game, and this theory was blown out of the water the other day when a very young 20 year old poker player managed to bag a huge prize pool in one of the many Sky Poker land based poker tournaments.

The player in question has not been playing poker for long and is only 20 years old, and in between his college studies loves nothing more than playing poker. Alex Spencer is this lads name and he is currently a student as the University of York in the UK who quite aptly is studying both accountancy and finance, so it may just be his college courses that give him an advantage at the poker tables!

This Sky Poker tournament was held at the rather unusually named Dusk till Dawn venue which is located in the midlands of the UK in a town called Nottingham. He took his place alongside 619 other players is the 2014 Sky Poker UK Poker Championship Main Event, and through a series of very wise poker playing and betting decisions managed to beat all of his opponents one by one!

Alex managed to win a huge £125,000 share of the prize money and also won a £15K tournament prize package which may just see him progressing his way through to another prize paying position at another Sky Poker tournament in the near future.

If you are hunting around for an online poker site that holds plenty of daily poker tournaments but also offers plenty of land based poker tournament which you can win a direct entry into online then we are more than happy to introduce you to and recommend to you the Sky Poker site for they do have a very robots and state of the art poker software platform that is a breeze to use.

As a new player of the Sky Poker site you are of course going to have a new player sign up bonus at your disposal, however Sky Poker does look after all of their existing and regularly poker players and as such by playing here regularly you are going to be able to pick up all manner of little extras such as ongoing bonus offers and you will also be earning poker comps when you play any of their poker games for real money.