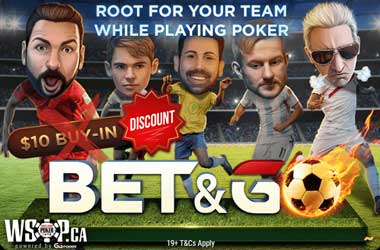 GGPoker‘s brand-new tournament offering has made its way to Ontario.

“Bet & Go“, a new tournament format that combines elements of poker and sports betting, was first launched on GGPoker’s global client before going live on WSOP Ontario on November 23. Bet & Go’s rollout in Ontario is expected given that WSOP Ontario is powered by the GGPoker software.

The launch of Bet & Go coincides with the FIFA World Cup which is currently underway in Qatar. Canada is participating in the massive event, alongside 31 other countries. Bet & Go launched on WSOP Ontario on November 23, just in time for Canada’s first game.

How to Play Bet & Go on WSOP Ontario

Each Bet & Go tournament is linked to a football game, and for the inaugural version, players will select teams from the ongoing World Cup. The tournament involves two buy-ins, each available at a discounted price. Just how much you’re going to save on the entry fee will depend on your chosen team’s odds. You’ll get a bigger discount when you pick an underdog.

As each Bet & Go tournament is linked to a football match, your results will largely rely on the performance of your selected team. If the team you chose ends up winning the match, you’ll proceed to the next round of play until you reach the money. However, if you pick the losing team, it will be game over for you and you will be automatically removed from the table.

If the football match concludes in a draw, the Bet & Go tournament continues as normal. If you lose on your first attempt, you can take another shot via the late registration feature for a standard buy-in of $10.

For the 2022 FIFA World Cup, Canada belongs to Group F and is scheduled to play three games. The Canadian team lost its first game on November 23 against Belgium.

Canada will be up against Croatia on November 28 and will battle it out with Morocco on December 1. As the first match is already completed, there are two more Canada-linked Bet & Go tournaments available on WSOP Ontario. Those supporting Canada in its second game will pay a discounted buy-in of $2.29, while those rooting for Croatia will pay $6.71.

For the third game, Canada supporters will pay $4.39 to enter the tournament, while those betting on Morocco will pay $4.61.