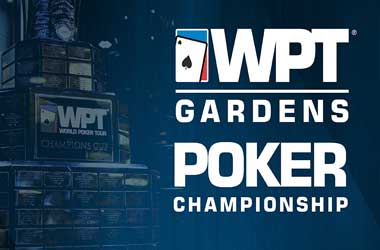 Poker players have a great line-up of tournaments to play at the start of the new year.

Players in California will not have to travel far as the World Poker Tour (WPT) starts 2019 with its WPT Gardens Poker Championships which will take place at the Gardens Casino at the Hawaiian Gardens, California.

This WPT poker festival will run from January 1-16 and will see top poker players from the West Coast in attendance. Earlier in July, the Gardens Casino hosted a WPT Main Tour and the $5,000 Main Event was won by Simon Lam. Lam took home $564,055 for his first-place finish, plus a brand-new Mercedes-Benz SLC Roadster.

There will be 20 different events spread across the festival which will run for over two weeks. Guaranteed prize pools are expected to be announced soon for each of these events as tournament organizers look to draw more players locally and internationally.

The festival will also feature two mixed-game tournaments, a $350 H.O.R.S.E. event taking place on January 10, as well as a $5000 buy-in Eight Game Mix Six Max on January 16. Each of the events will run for only one day, except the Main Event which will take a few days for the winner to be crowned.

The first WPT Main Tour Main Event of 2019 will run from January 12-16. There will be two starting flights scheduled on two different days and players can expect more days of action. To enter, players need to make a $10,000 deposit.

A $25,500 No-Limit Hold’em Six Max is also in store for high rollers, taking place on January 16. The event is expected to attract some of the world’s most seasoned high rollers who will battle it out for a nice payout.

The final six players at the Main Event will move over to the HyperX Esports Arena in Las Vegas and battle it out on March 12. The move is part of a partnership between the WPT and the eSports venue. The six-handed final table at the Main Event will be televised, offering a one-of-a-kind viewing experience for poker fans. This marks the first televised event of Season XVII of the WPT.