“The Mouthpiece” Makes A Return As A Brand New Podcast

“The Mouthpiece” Makes A Return As A Brand New Podcast 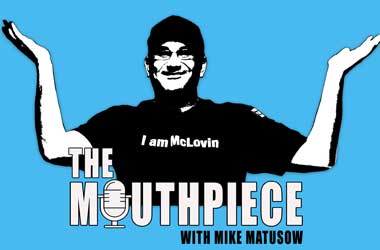 Mike “The Mouth” Matusow is embarking on a new poker adventure!

The four-time World Series of Poker (WSOP) bracelet winner, who is popular in the poker world for his verbal antics and sometimes “controversial” life, is jumping into content creation, joining the likes of Daniel Negreanu and Joey Ingram.

While it’s too early to tell whether or not Matusow’s latest venture will be a huge hit, we can look back at the success of his own video series called “The Mouthpiece“. The video series started in 2007 and ran for about three years, finishing up with a total of 70 episodes. Matusow starred in The Mouthpiece in collaboration with CardPlayer.

The show pulled in upwards of 35,000 followers but was dropped after a disagreement with the poker publication and online portal. Nevertheless, Matusow considered it a successful show and now he’s trying to resurrect it by starting a podcast of the same title.

Staying True To Himself

Apart from doing The Mouthpiece, Matusow is also producing lots of satire videos on a YouTube channel and shares his daily grind through a video blog, along with some final table commentary.

Things are going well so far for Matusow and he believes his entertaining and genuine personality will play a big role. The 51-year-old said he is the type of person who wears his heart on his sleeve. Matusow also revealed he is not a huge fan of political correctness, saying criticisms should be freely expressed and that things should be told the way it is.

While he admits his cursing and trash-talking sometimes get him in trouble, Matusow said people still like the sincerity and he will continue being the honest person that he is, unafraid to express himself.

Going Mainstream With A Unique Structure

Matusow does not want his podcast to be confined to poker alone. While he acknowledges that he isn’t as polished as Negreanu in terms of content creation, what sets him apart is his willingness to discuss other subjects outside of poker, including current events, sports, news items, and even politics.

When asked about his goal for his podcast, Matusow said he wants The Mouthpiece to go mainstream and become really huge. For now it will run as a weekly podcast, being supplemented with tons of vlogs on Matusow’s 2019 WSOP journey.

Matusow is currently competing at the WSOP 2019 at The Rio, looking to add another WSOP bracelet to his collection.