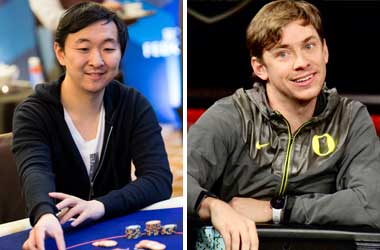 Rui Cao emerged victorious in the €25,000 Short Deck event at the 2022 Triton Series Madrid. The French poker pro finally added another major victory to his poker resume after taking a break from the tables for almost three years.

It was the second Triton title for the poker pro who also won the Triton Montenegro Short Deck Main Event back in May 2019 for more than $3.3 million, his largest cash to date.

The final table was made up of nine players who were guaranteed to take home at least $51,870. The first player to bust was Ryan Rum (9th, $51,870), followed by Isaac Haxton (8th, $67,830). Cao scored his first elimination when he defeated Santi Jiang during a battle of pairs. Jiang walked away with $87,675 for finishing 7th.

The star-studded final table also included no other than three-time Triton winner Jason Koon. His quest for a fourth Triton trophy ended after his 10-9 suited was defeated by Cao’s A-10. Koon secured a 6th-place finish that came with a $100,670 payout.

Next to hit the rail was Kenneth Kee, again courtesy of Cao. He claimed the 3rd sport for $243,600, giving Cao a 2:1 advantage over Yong when heads-up play began. Yong managed to grab the lead at some point, but Cao regained his dominance and never looked back. Yong took home $374,850 as runner-up.

Chris Brewer may have crashed on the bubble in the tournament won by Cao, but he already secured a victory a day prior, in the €20,000 Short Deck event.

The up-and-coming poker pro outclassed a field of 62 entries and defeated Michael Watson heads-up to take home $390,600 in first-place prize and his third tournament title of 2022. Watson walked away with $282,555 for finishing second.