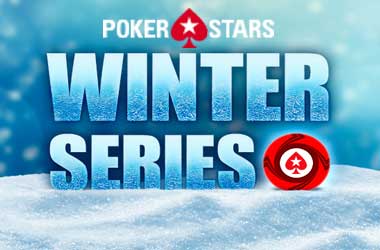 PokerStars is moving forward with its popular Winter Series which will run in conjunction with other major tournaments hosted by the online poker site this festive season.

The Winter Series will have four different versions according to the players geographic location.

PokerStars is offering $40 million in total guaranteed prize pools for the biggest Winter Series, which will run on the site’s global network from December 23 – January 7. The series will feature a total of 60 events. On top of that, another $45 million is up for grabs from the regular schedule, bringing the total prize pool to $85 million.

Each of the Winter Series events are sub-divided into four tiers which include Micro, Low, Medium and High. All in all, players can take part in 240 events. Players of all levels will have the chance to win big, with buy-ins starting from as low as $0.55 and going all the way up to $5,200.

The online poker site will also run a number of satellites which will give players an opportunity to win a Winter Series seat at a discounted price. Tickets and cash prizes can also be won by playing $2.50 and $20 Spin and Go’s.

There are also two events in store for those who are into high-roller action. Two $5,200 High Rollers will run from December 26 to January 2, each carrying a guaranteed prize pool of $500,000.

Meanwhile, players in Spain, France and Portugal will not miss out on the action as a Europe version of the Winter Series will also take place from December 25 – January 17. There will be a total of 297 tournaments spread across the festival. Players can get a share of a record-breaking €20 million total guaranteed prize pool, with buy-ins starting from as low as €2 to €250.

Players in India and New Jersey aren’t left out as they will also have their own Winter Series which will take place on Dec 16 – 24, and Jan 14 – 21 respectively. Players in New Jersey will compete across 12 events to get a slice of the $325,000 in total prizes. The Winter Series in India will feature 37 events with a guaranteed prize pool of 14,800,000 rupees.