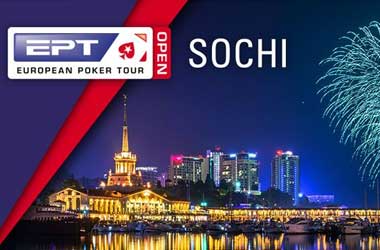 After a successful European Poker Tour (EPT) Sochi in March, PokerStars will be coming back to the Russian hub with brand new prizes, lower buy-ins, and as many as 5 Platinum Passes when the EPT Sochi Open returns in September.

The EPT Open Sochi will once again be held at the luxurious Sochi Casino & Resort and will run from September 21 to 29.

His win also got him a Platinum Pass to the PokerStars Players NL Hold’em Championship (PSPC) in 2019.

The EPT Sochi stop turned out to be a great success for PokerStars and resulted in the EPT coming back to Sochi in September. There are a few changes that will take place at the September stop.

PokerStars decided to conduct a similar tournament but with a lower buy-in format. While the full schedule of events is yet to be revealed, PokerStars has secured September 25 to 29 for two of their biggest events: the EPT Open Sochi Main Event and the EPT Open Sochi High Roller. The Main Event will start with a smaller RUB 132,000 ($2,125) buy-in while the High Roller is priced at RUB 258,000 ($4,150).

The smaller Main Event buy-in this time around will make it a brilliant opportunity for players of all bankrolls to play on home soil and give Russian players the opportunity to take to the felt against some of the best players from around the world. At the EPT event earlier this year there were more than 1,300 players from 61 different countries!

Apart from the great prizes that await players and the chance to win PokerStars merchandise and meet PokerStars ambassadors, one of the key prizes that players are looking forward to at the EPT Open Sochi are the five Platinum Passes to the PSPC that will be given away. Each Platinum Pass is worth $30,000 and will cover accommodation, travel and food costs and include the $25,000 buy-in seat to PokerStars’ biggest high roller poker tournament in 2019.

PokerStars is yet to confirm all the events that will give away these Platinum Passes. However, PokerStars has confirmed that the winner of the Main Event will receive 1 Platinum Pass.