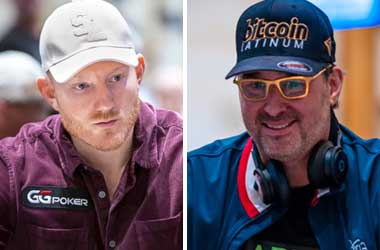 The schedule of the long-awaited High Stakes Duel match between Phil Hellmuth and Jason Koon has finally been released.

The poker pros will battle it out on Dec 7, 2022, at the PokerGO Studio at ARIA Las Vegas, with a massive $1.6 million on the line.

Koon took over the seat vacated by Scott Seiver who was supposed to face Hellmuth in a rematch in August. Citing personal reasons, Seiver decided to call it quits after his Round 4 defeat to The Poker Brat, and Koon was then selected as his replacement.

Hellmuth vs. Koon in High Stakes Duel III Round 5

To take on Hellmuth for Round 5 of High Stakes Duel III, Koon is required to put in $800,000 as buy-in. Combined with the existing $800K in the pot, both players will compete for $1.6 million in total prize pool.

The Poker Brat has the edge in terms of the stakes involved, as he can decide to take the seven-figure prize and decline a rematch should he win the upcoming bout. Koon couldn’t do that just yet if he ends up defeating Hellmuth. As per the rules of the game, the GGPoker Ambassador needs to conquer three straight matches to cash out his winnings.

Hellmuth’s original opponent in the current series of games was sports talk show host Nick Wright who did not proceed to the second round and was replaced by Tom Dwan who gave Hellmuth his first-ever loss.

Dwan and Hellmuth faced each other again in Round 3 where the latter was able to redeem himself. A rematch was scheduled between both players but Dwan did not manage to make it to Vegas on the day of the match, so Seiver went in and eventually lost.

Hellmuth is currently enjoying a 9-1 run on the show, earlier sweeping Antonio Esfandiari and Daniel Negreanu.

Battle of the Elites

The battle between Hellmuth and Koon should be an epic one given their status in the game. Hellmuth holds the record for the most World Series of Poker (WSOP) bracelet wins at 16, amassing more than $28.4 million in live cashes throughout his career. Koon is one of the most accomplished players in the high-roller circuit with one WSOP bracelet to his name.

He is ranked 7th in Hendon Mob’s All-Time Money List with $40.2 million in live tournament winnings.