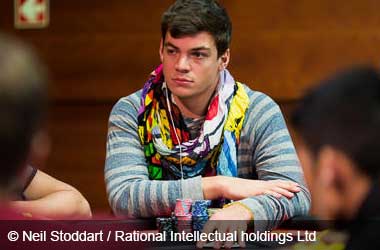 If you look at the top 30 poker players who sit on the All Time Money list you will find four from Germany with Fedor Holz taking the fourth spot.

German poker player Paul Michaelis is making a name for himself on the live poker circuit after taking down the 2018 EPT Prague Main Event. Michaelis worked out a 3 way deal with Artem Kobylynskyi and Alexandr Merzhvinskii.

Merzhvinskii took the third spot with a payout of €631,500 while Kobylynskyi received €571,910 for his second place finish. Michaelis took the highest payout with €840,000 in prize money which doubled his total prize money and brought it up to $1.77 million and put him in 67th place on Germany’s All Time Money list.

The payout was a fitting reward for all three players who had a tough playing field as the Main Event had a total of 1,174 players. It was especially sweet for the 28 year old German poker pro who not only received a nice payout but a $30,000 Platinum Pass which gives him a seat to the PokerStars Players No-Limit Hold’em Championship which takes place in the Bahamas in January 2019.

Michaelis was thrilled with his performance and his prize money but confirmed that he will not be taking all of the cash as he has to pay back swaps and his financial backers who staked him.

Michaelis who has a World Series of Poker (WSOP) gold bracelet to his name, has worked really hard on improving his game this year. He has travelled extensively in 2018 and has cashed out in 8 countries bringing his winnings to $150,000 prior to his 2018 EPT Prague Main Event win. He can now say that he had a phenomenally 2018 as he has won over $1 million in prize money.

Michaelis said that his travel and grinding around the world has given him invaluable experience. The fact that he has played at a number of Main Events around the world helped him to stay calm at the EPT Prague Main Event and accumulate a huge stack of chips that helped him to call the shots. He will look to continue his good run in 2019 and move up on Germany’s All Time Money list.