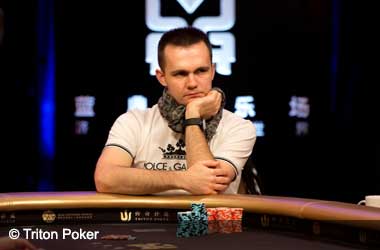 Mikita Badziakouski is having a tremendous run in 2022.

Hot on the heels of winning the €100,000 European Poker Tour (EPT) Barcelona Super High Roller for €1,979,220, the Belarusian poker pro has conquered another tournament, the 25,500 Super High Roller, which ran as part of the 2022 PokerStars World Championship of Online Poker (WCOOP).

The tournament attracted a total of 56 entries, including 16 re-entries, to generate a total prize pool of $1,373,400. In the end, only seven players reached the final action, and Badziakouski topped them all to take home the lion’s share of the prize worth $426,748. Finland’s Eelis “EEE27” Parssinen became the bubble player after finishing in eighth place, narrowly missing out on the money.

The remaining players quickly got down to business as soon as the final table was formed, resulting in the eliminations of Austria’s Thomas “WushuTM” Muehloecker and Mexico’s David “dpeters17” Peters. The duo busted in 7th and 6th place, collecting $59,768 and $82,938 respectively.

During four-handed play, each player was already guaranteed to walk away with six-figure prizes, and the first of those went to Hungarian poker pro Laszlo “omaha4rollz” Bujtas who finished 5th for $115,090. Next to go was Austrian poker star Linus “LlinusLLove” Loeliger who ended his bid in 4th place for $159,706. Heads-up play was set when Canadian player Pascal “Pass 72” Lefrancois bowed out of the game in 3rd place for $221,618.

Badziakouski was joined by another prominent name in the high roller circuit, Aleksejs “APonakov” Ponakovs in the finale. The pair are both enjoying a great year, with Ponakovs also winning multiple titles over the past few months, including a victory against Phil Ivey in the $100K NLH High Roller 8-Handed event at the 2022 World Series of Poker (WSOP) live festival at Bally’s Las Vegas.

But in the WCOOP 71-H: $25,000 NLHE Super High Roller though, Badziakouski proved too tough to handle, forcing Ponakovs out of the game to win the tournament. Ponakovs had no choice but to accept he came off as second best in the event, earning $307,530.
The 2022 PokerStars WCOOP festival, which offers $85 million in total guarantees, will conclude on September 28.