9 Tips for Beating the Bubble in Poker Tournaments

9 Tips for Beating the Bubble in Poker Tournaments 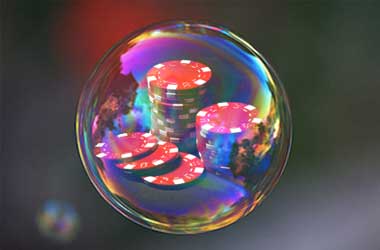 Even if you’re genuinely good at poker, getting through to the prize stage can be more challenging than you think. When playing in poker tournaments, everyone wants to experience the buzz of the bubble stage. But what exactly is the “bubble”?

The term “bubble” refers to the point in a poker tournament when players are about to make cash.

For example, if the top players win prizes and you end up as the 21st — you’re in the bubble. In other words, you will end up as the highest-finishing player with no money in your pockets. Clearly, this isn’t the scenario you were hoping for, and you’ll have to use your head if you’re going to beat it.

Today, we’re going to make sure that you don’t go home empty-handed by showing you how to make it through the bubble stage in a poker tournament. Once you’re done reading this post, you’ll not only learn how to survive the bubble but also increase your chances of winning the whole thing. Below is a video of Poker Pro Daniel Negreanu giving some of his own tips.

Our team has also shared a few words of wisdom below to help you make it through the rough patch of the bubble.

We will further elaborate on these tips later on. Stay tuned! If you looking to get into the poker action right away why not take a look at some of the new poker sites added to our site, offering some great tournaments and excellent welcome bonuses.

1. Raise as Much as Possible

You probably already know this, but the chances are that you’re not doing it frequent enough. Keep in mind that open limpers often get crushed, so avoid doing it at any cost. The odds of you winning it without a showdown are just too tempting.

Maybe we have emphasized this tip a bit too much, but you get the idea.

2. Know When to Fold

Just because K10 is ahead of your range when you decide to push over a late position, raise doesn’t always mean you should call. A lot of players on the bubble are aware that you are bluffing but are afraid to push back. Also, there are a lot more of those who are waiting for big hands to counter your raise. If it starts happening frequently, you should loosen your calling range, but also be aware that the first time someone challenges your raise, he or she probably has a strong hand.

You can always regain the losses you are folding away in one cycle of the game. On the other hand, a few questionable calls can affect your stealing ability. You can win a lot of hands without going to the showdown on the bubble, and so you shouldn’t be so eager to get there.

3. Go After the Weak

The decision of whether to open raise or not is determined by three factors — who is in the blind, your position, and your cards.

Before the bubble round begins, you should identify the play-to-cashers, and keep paying attention to those who seem to be making big laydowns and those who are not defending blinds.

4. Pay Attention to the Competition

The play-to-cashers are not your enemies. At this point of the tournament, they’re just throwing away free cash, and it’s up to you to seize the moment and take it.

But keep in mind that you still have to beat other play-to-winners who will be trying to scoop all that dead money as well. Expect to see a lot more steal raises and re-steals from these players, and adapt your strategy accordingly.

5. Take a Sneak Peek at the Chatbox

You would be surprised to see how many people express their emotions every time they win a pot. It’s like they’re begging you to run them over.

Looking into the chatbox can give you an insight into who’s playing to cash, and that allows you to adjust your strategy accordingly. Players will comment on how often you’ve been raising or try to lure you into calling “next time”. Pay attention to these clues, as they can help you make tough decisions when facing a re-steal.

Most players will take it personally when you raise their blinds. If you do it too frequently, they will feel like they have to stand up to you, and things can go south if you’re not cautious.

Consequently, many play-to-cashers will realise that you’re stealing, but won’t particularly care as long as they don’t feel singled out.

If you re-raise or call your blind several times, even the high rollers will back off, as there are more manageable and less risky ways to find some value. Play-to-cashers will sometimes try to steal as well, usually by open limping or min-raising from late position. They will often back off of even weak hands when they are pot committed and faced with the possibility of being bubbled out.

8. Protect Your Opponents’ Blinds as Well

An aggressive bubble player on your right will always steal-raise ahead of you, and it can really cramp your style. But you can use this to your advantage — they are risking a substantial amount of money, and they can’t keep up with that tempo for long. Their only two options are to stop raising and let you exploit the weak players’ blinds or to keep raising and donating to you. Whatever the case, it’s a win-win situation for you.

9. Be the One Calling the Shots

Just because someone is rushing to see a flop doesn’t mean that they have a fantastic hand. The majority of the table will be defending, stealing or re-stealing, and there are a lot of those who want to make it to the flops without having especially strong cards in their hands. In most cases, they’re hoping to get to a low-stakes showdown or to throw you off of your game.

If you play your draws aggressively, a significant amount of such players will back off. You must structure your strategy in such a way that you are the one calling the shots, or pushing all-in in this situation. It’s much more challenging to call a push with a marginal hand than to push with one.

Being knocked out on the bubble can be harsh, but it’s essential to learn from your mistakes. After all, you almost made it, so it’s not like you have been playing awful. You just need to make that one final step. With a positive analysis of mistakes made during play, you can determine what you could have done differently. By combining the knowledge you gained from reading this article and putting it into action at one of our iPhone poker sites, the buzz of the bubble in future tournaments will work in your favor!

If you have any thoughts on impressions on this topic, please share them in our comment section, as we would be delighted to hear them out.