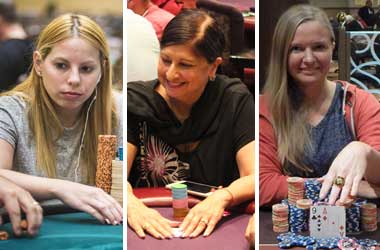 Over the last few years, tournament organizers have stepped up efforts to increase female participation in poker events throughout the world.

One of the popular poker tours that has succeeded in drawing women players from all over the world is the World Series of Poker Circuit.

The first half of the Circuit’s 2018-2019 season has seen a nice push from female poker pros who have been on top of their game with great runs, final table finishes and ring victories in various open events.

One of the ladies who have made a mark on the Circuit is Loni Harwood. She has the most number of WSOPC rings with a total of 5. She has also won two bracelets, one of which she earned in the 2014/2015 National Championship which was later renamed as the Global Casino Championship. Harwood topped 122 other players and took home $341,500 for a buy-in of $10,000.

There have been remarkable ladies performances during the first half of the Circuit season. A total of 11 female players won a ring. Four women managed to secure a spot in the Circuit leaderboard’s top 50 players, while one female poker pro took down a main event.

2018 was a historic year for female poker pro Farhintaj Bonyadi who won a bracelet in Event #36: $1,000 Super Seniors No-Limit Hold’em. Her son Farzad “Freddy” Bonyadi is a bracelet winner himself which means they are the first mother-son duo to ever have that achievement.

Following in the footsteps of the Bonyadis, Nikhil Gera and his mother Manju Gera also claimed a Circuit ring each, with Manju earning her ring after besting a field of 74 players in the $400, H.O.R.SE. event which took place during the Thunder Valley Circuit in September 2018.

The middle-aged lady won $8,303 for being the first place winner. She also secured a Casino Champ win after three cashes at Thunder Valley, making her the first ever player to claim such honours by scoring points exclusively in non-Hold’em contests.

A familiar face in the WSOP Circuit scene, Heather Alcorn initially planned to make her Horseshoe Southern Indiana experience a quick one, but she ended up winning the Main Event, topping a field of 389 entries.

Alcorn has revealed she learned most of her skills from being a professional dealer, adding that her exposure to different poker settings enabled her to practice her reading ability.

Alcorn’s victory made her the third woman to win a Circuit main event. The first female player to do so was Yashuo “Michelle” Chin in April 2015, followed by Vanessa Truong two years later in April 2017.