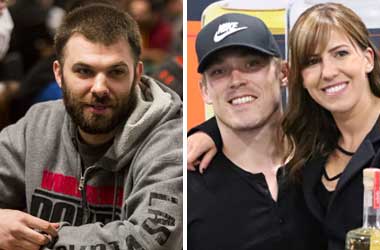 The poker community may not recognize the name Nick Palma but they most certainly will recognize Alex Foxen and Kristen Bicknell who are poker’s power couple.

Palma isn’t known for his accomplishments as a poker player but for the controversies that have surrounded him over the years.

Despite all his controversies in the past, Palma who has just over $1.6 million in prize money according to the Hendon Mob decided to sling mud on Twitter at Bicknell and Foxen. Palma resorted to name calling and labelled Bicknell a dumb ‘bi****’. Prior to going after Bicknell, Palma ended up taking a shot at Allen Kessler for his excessive mark-up charge for his action on the Seminole Hard Rock Hollywood Poker open.

Palma also targeted Foxen by making reference to an old cryptocurrency lawsuit that was filed by a South African by the name of Rohit Chamani. When the lawsuit was filed, Foxen was named initially as he was one who solicited the investment of Chamani and leveraged his relationship to bring money in.

Foxen was one of the partners in this venture and along with his partners he raised over $2 million from 17 investors but the company went bust soon after.

Foxen and Bicknell Respond To Allegations

When Alex Foxen found out that Palma was accusing him on social media over an old lawsuit, he quickly looked to clarify things and put circulating rumours at the rest. Foxen claimed that all of the allegations were false as the lawsuit was filed against a company he co-founded but his name was not personally mentioned on the lawsuit.

Foxen said the judge who heard the case reprimanded those who brought the case to court before eventually dismissing it. Foxen claimed he had tried in the past to help Palma out but it was clear that Palma did not want any help as he preferred to cause unnecessary controversies and continues to try and scam the poker community.

Palma has quite a checkered past which includes allegations of robbery, sexual assault, fistfights and public humiliation. Bicknell responded by saying Palma was a sad case who even turns on the friends who try and help him!