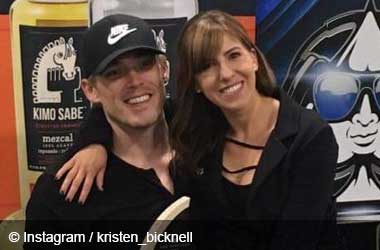 When you spend hours on end playing the same circuit, traveling to poker tournaments and sitting at the same table, you tend to develop close relationships. There are a number of poker players who have ended up dating each other and getting into a relationship but very few of these couples have had major success at the same event.

Poker players Alex Foxen and Kristen Bicknell are the exceptions as the power poker couple have had a lot of fun playing poker together.

The power couple took part in the $5,000 MSPT Venetian which took place over the weekend. While all eyes are on the 2018 WSOP at the Rio, there was a decent turnout at the MSPT Venetian which saw a total of 178 registrations which resulted in a small overlay to reach the $1 million guaranteed prize pool.

They made it to the final table at the partypoker MILLIONS Barcelona €25K Super High Roller and Foxen finished in 7th place while Bicknell took the 8th spot. MSPT Venetian

The real life couple had a long final table and in the end struck a deal which resulted in them leaving $39,000 (10 percent) behind. They each took home a cool $200,000 for their efforts.

In a statement, Bicknell said

In a way it was really fun but then there were some spots that felt really frustrating because I want him to do well but I want to do well. We both want to win and both want each other to win but that’s not possible so it was a little hard. We talk poker all the time and that makes it a little difficult in hands because we kind of know what each other is thinking. I was a fun experience overall