China’s Quan Zhou Is Embroiled in Controversy at EPT Barcelona

China’s Quan Zhou Is Embroiled in Controversy at EPT Barcelona 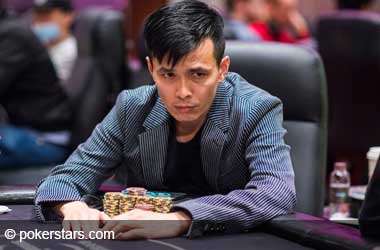 The Main Event which featured a buy-in of €5,300, attracted a total of 1,489 players and ran for seven days, concluding on September 1.

The event may now be over but a controversy involving two players who did not finish in the money made the headlines and created quite a stir in the poker community.

The controversy took place during Day Three when Quan Zhou opened to 6,000 holding pocket sixes. Russia’s Nikolay Ponomarev three-bet to 18,500 with Ace-King. When it was Zhou’s turn to move, he took a moment to carefully think about his decision and then appeared to fold his cards, moving them a few inches towards the dealer, only to take them back to indicate that he wasn’t giving up just yet.

In the process, Ponomarev lifted his cards slightly with Zhou seemingly taking a glance at the Russian pro’s hole cards. Zhou then put in a call. Ponomarev picked up top two pair from the flop and then bet out. Zhou folded without hesitation, and this time he was no longer fake-folding as he forwarded his cards to the dealer. The hand may not have affected the pot size, but Zhou’s action sparked criticism and negative feedback on social media.

Reactions from the Poker Community

Whether or not the Chinese poker pro’s move was intentional remains to be seen, but majority in the poker community believe Zhou committed angle-shooting.

Joe Stapleton who was commentating when the controversial hand took place said Zhou’s action was questionable but the Twitch announcer said he does not consider it cheating, saying Zhou may have just changed his mind in a “shady” manner. But this notion did not sit well with others in the world of poker.

Hendon Mob executive Eric Dans described the act as “gross“, and while top online poker pro and commentator Randy “nanonoko” Lew said it was clearly an angle-shoot. To show proof that Zhou was indeed cheating, poker vlogger Jeff Boski posted a screenshot of the Chinese player apparently taking a peak at Ponomarev’s cards.

Nothing to see here! pic.twitter.com/1Xy275ZAIt

Neither of the two players cashed in the Main Event, but many poker players believe Zhou should have been penalized. The EPT Barcelona Main Event was ultimately won by Simon Brandstorm for €1,290,166.