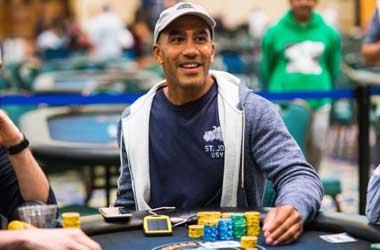 Bill Perkins is now $200,000 richer after winning a prop bet with Dan Bilzerian. Back in August 2021, the hedge fund manager announced on Twitter that he was embarking on a fitness challenge.

The goal was to bring his body fat down to less than 9 percent by April 2022, and the high-stakes player did just that!

When he started his weight loss journey, Perkins had an estimated body fat of 23-24%. Many didn’t think he could actually manage to cut it down considering his age, but Perkins proved his doubters wrong after coming in at 7.9% body fat during his weigh-in last week.

While he shared that his body fat was in a similar range at some point in the past 10 years, being able to bring it back at the age of 53 is still an impressive feat.

Today was measurement day for my Body fat bet and I smashed it at 7.9% !!👊🏾🥳👊🏾🥳💥🥳. Maintenance time! #Health #Fitness #painful #GimmeDaLoot pic.twitter.com/mtWpdU6aYV

The hedge fund manager happily shared his new achievement on Twitter, posting pictures of his muscular physique. The next challenge now, according to Perkins, is maintaining that great shape, given that the level of motivation will be quite different now that he has already achieved his goal.

It won’t be surprising if a follow-up prop bet will be launched, but this time, the conditions will require Perkins to keep his body fat below 9 percent. Many fans congratulated Perkins for a job well done, with some even asking him about his routine so they too could achieve that nice look.

Meanwhile, Doug Polk’s body fat bet with Perkins is still ongoing. The Upswing Poker founder who is no stranger to setting prop bets officially took on the challenge in February, and the goal is to lose half of his body fat in one year. He initially came in at 27.7 percent body fat when he got his dexa scan on February 10. To win the bet, he must be able to cut it down to less than 13.85% by February 10, 2023.

(Bill encouraged me to post a before photo, posted below)

Polk is relatively younger compared to Perkins, which means the task should be a little easier for him. Perkins was able to hit the target, reducing his body fat from 24 percent to 7.9 percent in just eight months. Polk is only required to cut his body fat by half within a longer period of one year. But all the same, Polk should still pour in a lot of hard work if he doesn’t want to lose $200K to Perkins.