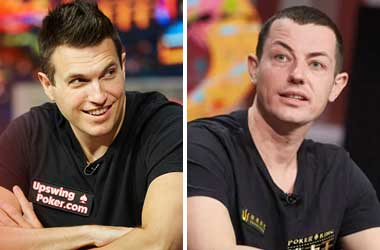 Doug Polk is currently putting together his list of the top 20 poker players of all time and is collecting votes via a social media survey. A lot of the votes have come in favour of Tom ‘durrrr’ Dwan and this has surprised Polk as he does not believe Dwan should be ranked in the top 20.

Polk claims that he understands why Dwan is considered the ‘Golden Boy’ of his generation of poker players but his credentials do not justify the fact that he needs to be in the top 20 list of poker players of all time. Polk also made reference to the fact that Dwan has never won a World Series of Poker (WSOP) bracelet till date and its hard to put someone in the top 20 poker goat list when they have no WSOP bracelet to their name.

Dwan Challenged To Win His First WSOP Bracelet In 2022

Polk who has won 3 WSOP bracelets issued a prop bet challenge to Dwan on social media. Polk claims that he is willing to put $1 million on the line if Dwan can win a WSOP bracelet at the 2022 WSOP. Polk also went on to point out that he does not expect Dwan to accept the challenge.

Polk who is now one of the co-owners of the Lodge Poker Club in Texas even offered solutions on how Dwan could come up with the money. He said Dwan could finance $500k of the prop bet and get any wealthy Asian businessman to finance the remaining $500k. As of now, there has been no response from Dwan on the proposed prop bet!

Poker pro Shaun Deeb responded to Polk’s prop bet and said that he was impressed with Dwan’s logic and skill over the years and would be willing to bet his bankroll that Dwan would be able to win a WSOP bracelet in 2022!

Also if this goes down any chance we can let others hop in I’m sure myself dnegs dan zack east and a few others want in would be sick with 10+ people https://t.co/cls9pbpbJC