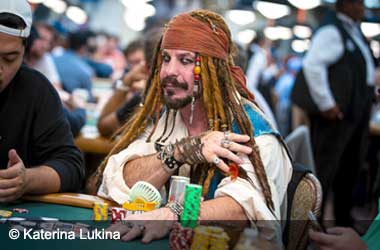 The 2022 World Series of Poker (WSOP) live festival at Bally’s Las Vegas has run smoothly since it kicked off in May, with no major incidents reported.

The WSOP always generates some unusual incident each year and this year was not an exception. Security had to issue a trespass warning to an individual at the venue for carrying fake pistols.

The fake pistols were part of poker player Scotter Clark‘s Jack Sparrow costume. He was hired and flown in by the WSOP for the Mystery Bounty event where he was tasked to greet players as they pulled their envelopes, with Pennsylvania’s Matt Glanz becoming the lucky player to hit the $1 million jackpot.

Clark enjoyed his stint at the Mystery Bounty tournament and many commended him for a job well done. He continued to wear his Jack Sparrow costume while taking part in the Main Event which created a fun atmosphere at the competition. That was his main goal in the first place – to promote poker as a fun activity. And that coincides with his gregarious and full-of-life personality.

Clark was having a lot of fun playing the Main Event until he was approached by security and tournament officials because of his pirate pistols. Upon inspection, it was confirmed that those were fake pistols, but Clark was still forced to surrender the props to the venue’s staff.

Despite the unexpected scenario, Clark managed to reach Day 5 of the Main Event and ended his run in 195th place for $53,900. At that point, he thought the fake pistol issue had already been resolved but he was wrong.

Immediately after receiving his winnings, a high-ranking tournament director, accompanied by two security personnel, approached him. He was then escorted to the security desk, after which several security guards entered. The sudden commotion caught Clark by surprise, and he was puzzled even further when he was issued a trespass warning, stating that he would be arrested if he entered any Caesars property.

Clark explained that it was the WSOP who hired him for his Jack Sparrow impersonation. A Jack Sparrow costume won’t be complete without a gun.

There could be some sort of miscommunication between the organizers and the existing rules at the venue regarding prohibited items. Clark wasn’t blaming the WSOP for it though, as he said officials were very accommodating and explanative.

Caesars and the WSOP have yet to issue a statement on the incident. Meanwhile, it looks like Clark will end up ditching any plans for the 2023 WSOP because of what he went through this year.