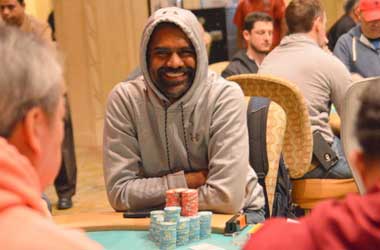 The final table of the 2020 LA Poker Classic finally played out on May 17, after being put on hold for over a year due to the COVID-19 pandemic. The action took place at the PokerGO Studio in Las Vegas, and when the dust settled, it was Bala Patur who was crowned the champion, taking home $1 million in winnings.

Patur began the final action as the chip leader, with Cimbolas coming in second, followed by Carroll in third place. That turned out to be their final finishing positions in the tournament. Patur won $1,015,000 as the champion, defeating Cimbolas in heads-up play. Cimbolas earned $600,060 for finishing second, while Carroll took home $431,585 for his third-place finish.

Patur’s victory at the LA Poker Classic marks his first-ever WPT title and his largest cash to date, and he worked hard for it. During his post-game interview, Patur said he really prepared for the finale by doing a lot of studies over the last 14 months, watching WPT videos and reading poker books. Following his win, Patur’s total live earnings have climbed to $1,258,104.

All 2020 WPT Delayed Final Tables Now In The Books

The LA Poker Classic got underway at the Commerce Casino in Los Angeles on March 3, 2020. The final action was supposed to take place at the HyperX eSports Arena in Las Vegas in April of last year, but it was hampered by worldwide lockdowns brought about by the COVID-19 pandemic.

Apart from the LA Poker Classic, the WPT was also forced to cancel the scheduled final tables of the WPT Gardens Poker Championship, the WPT Borgata Winter Poker Open and the WPT Seminole Hard Rock Poker Showdown in 2020.

The tour announced a new schedule for the delayed final tables earlier this year, and as of this writing, all of them have already played out, concluding with the WPT Seminole Hard Rock Poker Showdown final table on May 18 which was won by Brek Schutten for $1,261,095.