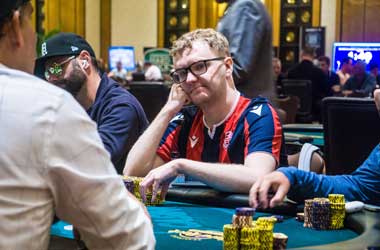 Wilson’s victory came with a $785,800 top prize, the biggest cash of his career, plus a seat into the upcoming $10,400 WPT World Championship at Wynn Las Vegas and a chance to etch his name on the prestigious Mike Sexton WPT Champions Cup.

The final six players immediately got down to business when the final table kicked off, and five hands into the action, one player fell. Robel Andemichael was the first to leave the table after losing his ace-four to Wilson’s ace-queen. He collected $167,000 for his 6th-place finish.

Defending champion Gediminas Uselis was looking to pull off a back-to-back victory but was unsuccessful after busting in 5th place for $219,000, again courtesy of Wilson. It didn’t take long before the next elimination took place, with three-time WPT winner Brian Altman hitting the rail just four hands later, his king-high straight defeated by Josh Kay’s ace-high straight. Altman placed 4th for $290,000.

Chad Eveslage has had an excellent run at the live felts this year after winning his first World Series of Poker (WSOP) bracelet during the summer and then capturing the record-breaking WPT $10,400 Five Diamond World Poker Classic in October for $1 million.

The American poker pro was gunning for his third WPT title in the RRPO Main Event, but failed this time, settling for 3rd place with $390,000 in winnings. He may have fallen short of the title but his latest finish has officially put him at the top of the WPT Season 20 Player of the Year leaderboard, surpassing Steve Buckner.

Wilson entered heads-up play with a 3:1 chip lead over Kay, which he managed to extend to a 10:1 advantage as the game progressed. But Kay wouldn’t give up without a fight. He was able to recover from the huge chip deficit and even grabbed the lead at one point.

The win marks Wilson’s first major live tournament victory and he was able to achieve that after battling it out with WPT veterans and titleholders. His live tournament winnings now sit at more than $1.4 million.