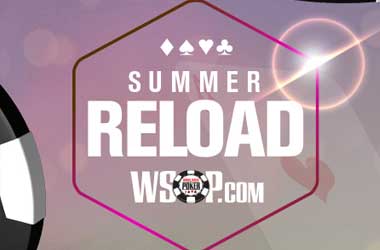 WSOP.com is running a reload bonus promotion throughout the summer for its players in New Jersey and Nevada.

Players can take advantage of up to $1,000 in match bonus as part of the site’s “Summer Reload” promo which runs until August 20.

The offer is open to all WSOP.com players in New Jersey and Nevada who make a deposit of at least $10 within the promotional period.

To claim their bonus, they only need to use the code “GOLD21“. There is only one code available for each player. The bonus amount will be credited in installments of $10 each time that 100 Action Player Points (APPs) is earned.

Only players aged 21 and above and are physically based in New Jersey and Nevada can qualify for the promo. Those making deposits via PayNearMe cannot avail of the offer.

Building Hype Around the 2021 WSOP Festival

The ongoing Summer Reload bonus promo is part of efforts to generate publicity for this year’s WSOP festival. The domestic leg of the 2021 WSOP Online Bracelet Series is in full swing on WSOP.com. The schedule includes 33 gold bracelet events, with satellites and freerolls running throughout the festival.

Players may take part in satellites to the online bracelet events for as low as $1 until July 30, with freerolls also held every Wednesday until July 28.

Apart from that, WSOP.com is also hosting satellites for the live WSOP Main Event this fall. Players who want to win their way into the huge event for a fraction of the price may take a shot at online qualifiers held every Sunday throughout July.

Players shouldn’t miss the Summer Reload promo as they can use their bonus to take part in these satellite tournaments.

WSOP.com is loaded with promos and events this July. On top of the WSOP Online Series, the site is also running a Summer Online Circuit Event until July 27 which offers more than $1 million in guarantees. That’s in conjunction with the Summer Online Championships which will give away $2 million in total prizes. Add to that a $320 buy-in, $100K GTD tournament running every Sunday, plus SNG and BLAST leaderboards.