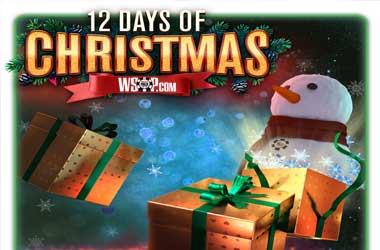 The next couple of weeks will be real busy for online poker players in Michigan and Pennsylvania as the World Series of Poker (WSOP) announced a new promotion that will award exciting prizes, among them is a seat to the 2023 WSOP Main Event in Las Vegas.

Running from December 7-18, 2022, the “12 Days of Poker” promotion features daily tournaments which come with extra prizes, apart from the regular guarantees on offer. The icing on the cake is a ticket to the 2023 WSOP Main Event which will be awarded via draw. To qualify, players simply need to play at least one tournament.

Each tournament has an additional prize coming in the form of cash or tournament tickets. For example, on the first day of the promotion, the WSOP will give away $400 in cash through a random draw.

For each tournament you enter, you receive one ticket to the WSOP Main Event prize draw. To boost your chances of winning the highly-coveted $10,000 Main Event seat, you may play all 12 tournaments and that will cost you just $78 in total. The WSOP will award one WSOP Main Event ticket in Michigan and another one in Pennsylvania. The draw takes place on December 20.

New Jersey and Nevada Players Miss Out on New Promo

Unfortunately for players in Nevada and New Jersey, the 12 Days of Poker promo will not be available to them, most probably because the software used by both platforms has yet to be upgraded. That’s in contrast to WSOP MI and WSOP PA which are already using 888poker’s new Poker 8 software.