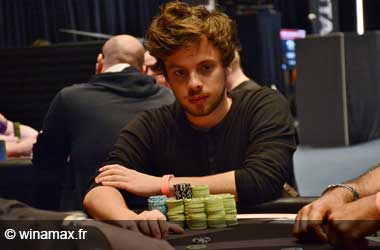 The French pro managed to score three top-10 finishes in bracelet events at the 2018 World Series of Poker (WSOP), earning him one of the top-10 spots in the WSOP Player of the Year leaderboard.

Lewis has lately been keeping himself busy playing online poker at Winamax’s events.

Romain Lewis is a Winamax Team Pro who recently took part in all 173 events on the Winamax schedule and went on to win two of them. He has decided to focus on online poker events for now and is having a great time in 2019.

Lewis finished third in the Series leaderboard, coming ahead of fellow Winamax Pro Davidi Kitai who landed in sixth place. With his latest wins, Lewis secured another boost to his poker bankroll. He now has a total of three wins in the recurring series and over $1.6 million in career prize money.

While the start of this year is not that good for Lewis in terms of live tournament results, the French player keeps himself motivated by pushing on with his GPI goal. He now sits at #62 in the GPI Rankings, with 2,535.17 points. He joins fellow French players Julien Martini, Sonny Franco, Alexandre Reard and Benjamin Pollak who are in the Top 100.

Lewis won close to $1 million in career prize money during 2018 and he was keen to keep that good run going into 2019 but that hasn’t really happened. The Frenchman participated in this year’s Aussie Millions which he considers the “best experience” of his life but he did not win much.

He has had a lot of disappointing outcomes in his poker career but is prepared to take both the ups and downs in his stride. Lewis, who currently ranks 33rd in his home country’s All Time Money List, won’t stop playing, studying and working, as he strives to stay on track for his objectives for the year.

We can definitely expect more action from Lewis at live tournaments in 2019 but for now he is having some fun with his co-Winamax Team Pros at the SISMIX tournament in northern Spain.

He will have a great opportunity at the 2019 WSOP to get back to his winning ways as there is more than $200 million in guaranteed prize money up for grabs along with 9 online bracelet events.