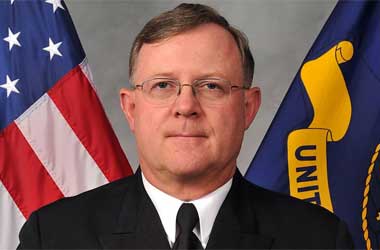 There has been major outrage in the US in recent days for one of their most highly ranked Naval Officers has been found guilty of making and then using his own fake counterfeit poker chips when playing in a land based casino site!

Vice Admiral Timothy Giardina had until this news came out had something of an unblemished Naval career and having worked his way up to the rank of Vice Admiral he was the deputy head of the US Strategic Command which in turn meant that he was also the second highest ranking officer in charge of America’s nuclear arsenal.

However, news has come to light that he has developed something of a passion and obviously an addiction for playing real money poker games in land based gaming venues and could often be found playing 15 hours of poker each week in the Horseshoe Casino which is located in Council Bluffs which is in Iowa.

In fact such a regular player was he that other fellow players and casino employees gave him and referred to him by the nickname of “Navy Tim”, and he was a regular in that casino for at least 18 months before he did something frowned upon by casino owners and fellow poker players and that was to pass on counterfeit chips.

The security team at the Horseshoe Casino were alerted to the fact that the casino had taken in the course of a poker game three counterfeit $500 chips, and were requested to review the CCTV footage in an attempt to find out where those chips came from, and it was then discovered that Mr Giardina was the person who cashed them in.

He was subsequently questioned and he declared his innocence, saying that he had purchased in the toilets of the casino from another player $2000 in chips for a much reduced price, however he finally admitted his guilt when the security team did some more investigations and revealed no such exchange took place.

The way in which it turned out he had counterfeited the chips was very basic for all he did was to repaint $1 chips in the colour of $500 chips whilst at the same time sticking over the $1 stickers attached to the chips a scanned and printed off sticker of a $500 chip. He has since been sacked from his job and has had to pay a fine of $4000 for his crimes.