Unibet Deepstack Open Is The First Tour To Accept Cryptocurrency

Unibet Deepstack Open Is The First Tour To Accept Cryptocurrency 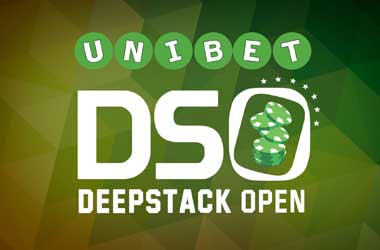 Unibet Deepstack Open is now the first international poker tour to accept cryptocurrency as payment for their tournament buy-ins—and players from blockchain-friendly countries are responding well.

The Deepstack Open is one of the longest-running poker series in the European circles and Season 9 is currently taking place at San Remo from May 17 to 20. The Unibet Deepstack Open in San Remo is just the fifth stop of the season, but Alex Henry founder and president of the Deepstack Open, said they’re already seeing great support from the community on the blockchain front.

Unlike other tournaments, the Deepstack Open features buy-ins around the €300-€500 range. They also offer freerolls to players who bust, where they can win tickets and even a share of the leaderboard prize pool.

Henry says that since he started Deepstack Open ten years ago with Alex Dreyfus, this kind of low buy-in format has become popular for recreational players in Italy, France and Spain.

In a statement, Henry said,

We offer our players the option to buy in with cryptocurrency. Unfortunately, it's not allowed in every country yet, but we accept it wherever it's allowed. With the event we did in Mauritius, we had 15 percent of the field paying their entry in cryptocurrency. Especially players from Russia or the Middle East like buying in with Bitcoins or Ether.

After the stop in San Remo, the Unibet Deepstack Open Cup will head to Lloret de Mar on June 8 to 10. This will be followed by a stop in Gujan Mestras on August 30 to September 2, and then Malta again from September 6 to 9, before heading to Cannes on September 28 to October 1. The last stop of the season will be made at the La Grande-Motte in France from October 30 to November 4 at the Casino Pasino La Grande Motte.

Cryptocurrency is fast growing with the poker community. More online poker rooms are investing into creating cryptocurrency-friendly spaces for poker players, websites are starting to accept crypto as payment and withdrawal options, and initial coin offerings (ICOs) for poker rooms are doing well.

Crypto enthusiasts who like playing poker are happy to see iGaming operators embrace cryptocurrencies and allow them to make deposits and withdrawals with the digital currency. The Unibet Deepstack Open’s positive response to opening up cryptocurrency options will encourage other operators to also start accepting cryptocurrencies.