Tennis and Soccer Stars Play in the European Poker Tour

Tennis and Soccer Stars Play in the European Poker Tour 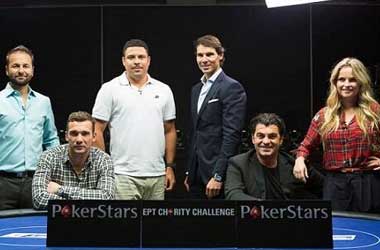 You may instantly associate Rafa Nadal with playing Tennis, however this legendary Tennis player along with Ronaldo one of the world’s greatest Soccer players have also been taking part in the Eureka Prague Main Event Poker Tournament.

Whilst it is not unusual to see sporting stars taking part in Poker Tournaments held all over the world, what has made Rafa Nadal’s appearance at this European Poker Tour event so unusual is that his every move was being filmed for an up and coming television documentary, which will be airing sometime in 2014.

Today, Thursday December the 12th 2013 will see both Ronaldo and Rafa Nadal taking to the Poker tables once again for a huge €100k Charity Poker Tournament, and both of these sporting stars will be hoping they manage to make it to the higher paying positions on the tournaments leader board and as such make as much money for the respective charity as is possible.

There is something quite unique in regards to the cameras being used to record Rafa Nadal’s progress through these poker games he will be playing in, and that is there are a huge number of them which are going to be filming each single hand played in a unique way, this being by using Time Freeze technology.

This new Time Freeze technology consists of a suite of television cameras which create a unique effect which appears to be a camera spinning around one person, in this case Rafa Nadal and results in the effect of the entire scene moving in slow motion.

This type of filming technology has been used to great effect on television games shows such as The Cube and Got to Dance, and really does add an extra level of excitement to viewers watching it playing out on their television screens.

The European Poker Tour or EPT as it is also known has been around since 2004, and it is one of the highest paying poker tournaments which has to date paid out via its prize pools well over €530 million in cash prizes.

Despite its name the European Poker Tour does not only hold Poker Tournaments across all European States but every January they hold what is known as the Pokerstars Caribbean Adventure which is an annual event held in the Bahamas!

During the tenth season of the European Poker Tour they have events planned all over the world with some of their much sought after and highly attended events being planned to take place in London, Vienne, Prague, Barcelona, Sanremo and Deauville.

European Poker Tour news and information, and will give you full details on the date, venues and entry fees of each respective event.