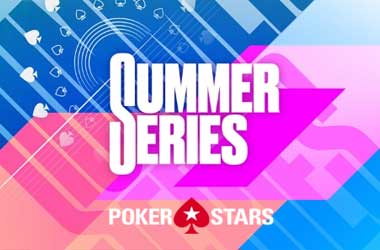 A brand new online tournament series has just got underway on PokerStars!

The Summer Series kicked off on June 7 and will run through to June 21, featuring a total of 166 events, and a $25 million guarantee.

The tournament is exclusive for players across PokerStars’ shared liquidity network.

The festival aims to attract as many players as possible by offering a wide range of buy-ins, starting from as low as $11, all the way up to $530, with at least eight events taking place each day. Majority of the events on the schedule are NLHEs, but there are plenty in store for Omaha lovers as well. The events are played in progressive KO, 8-Max, 6-Max, Turbo, Hyper-Turbo, PLO, Stud, and Deepstack.

While the festival is essentially not for the typical micro-stakes grinders, it still gives plenty of opportunities for players of all levels to take part for an affordable price, via satellites.

The schedule also includes two special editions of the Sunday Million, with $1,500,000 in guarantees up for grabs from each event. The festival is also loaded with multiple six-figure guaranteed events, so there’s tons of opportunities for you to win big!

The full schedule and details of the 2020 Summer Series is available at PokerStars.com.

The new Summer Series comes as the 2020 Spring Championship of Online Poker (SCOOP) concludes. The extended festival saw more than $185,000 in guarantees being awarded to the winners, creating history as the biggest prize money to be given away in a single tournament series.

The 2020 SCOOP Main Event was won by “Alexgirs” from Belarus, who topped a field of 609 entries and defeated Brazilian player Pablo “pabritz” Brito to walk away with $920,596 in first prize.