PokerStars And BetStars Host The Big Race With $3,000 Poker Holiday Up For Grabs

PokerStars And BetStars Host The Big Race With $3,000 Poker Holiday Up For Grabs 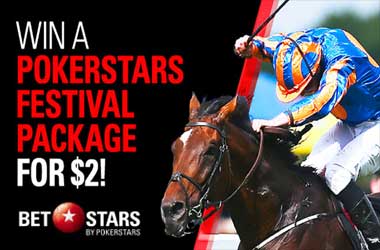 PokerStars and BetStars are once again teaming up for a new season of ‘The Big Race’ which gives players a crack at bigger prizes at minimal bets. The 2018 Big Race had a $2,000 PokerStars festival package to Bucharest, Dublin, or Lille and proved to be a massive success with the players.

As a result, the two companies have decided to team up yet again to launch The Big Race 2018 which comes with bigger and richer prizes. This 2018 edition will follow last year’s two-phase format and will have $2,000 in free bets and a $3,000 poker holiday package for players to attend to the upcoming PokerStars Festival in Marbella.

Finish in the Top 110 in the tournament and on top of the regular payouts, you will be given bets from $5 to $50 BetStars bets. These bets could be used in a number of sports wagers at BetStars, including the FIFA World Cup, Women’s FA Cup Final, US Open, and Wimbledon.

Finish in the in the Top 38 of The Big Race and you qualify for the second part of the race, which brings you a step closer to the coveted $3,000 poker holiday prize. The Top 38 players who make it into the second leg will be randomly allocated a horse running at the Gold Cup Day at The Cheltenham Festival which takes place on Mar. 16. As of now, there are 38 horses that are vying to run at the Cheltenham Festival event but the final number will change depending on the number of horses that will be confirmed for the final event.

Winning that first prize will be down to luck. The player whose horse finishes first at the Gold Cup Day will win the PokerStars Festival package, which comes with a €1,100 Main Event seat to the PokerStars Marbella stop which takes place on June 4 to 10. This special package also includes a six night stay at H10 Andaluica Plaza and a generous $600 in pocket money for the trip.

The two players whose horses finish second and third place at the Gold Cup Day will be rewarded with $500 and $250 worth of free BetStars bets respectively. The Big Race starts on Mar. 4, 6:00 p.m. GMT at PokerStars. Only residents of Ireland, United Kingdom, Isle of Man, or Channel Islands are allowed to take part.