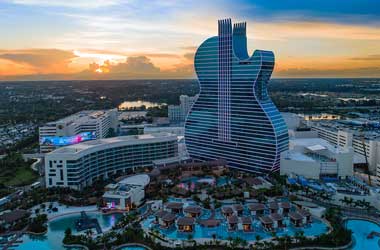 Live poker action is slowly coming back to life in South Florida! Seminole Hard Rock Hotel & Casino has finally reopened its doors, after having been closed since mid-March due to the coronavirus pandemic.

Its properties located in Hollywood and Coconut Creek have begun accepting customers from June 12, under enhanced health and safety guidelines.

Seminole Hard Rock Hotel & Casino has played host to some of the world’s most popular live poker tournaments, such as the World Series of Poker (WSOP) Circuit, Moneymaker’s Road to PSPC and the World Poker Tour (WPT) Seminole Poker Showdown. The first day reflected a high demand for poker in Florida, with 25 six-handed tables filled just a few hours after the reopening.

Both properties in Hollywood and Coconut Creek have resumed operations but with restrictions, as part of the Safe + Sound guidelines. The maximum capacity in both venues have been reduced to just 50 percent, while mandatory wearing of face mask as well as temperature screenings have also been enforced.

For the time being, the poker room at Seminole will only operate 25 tables, instead of the full 45, with a maximum of just six players allowed in each table. Regular disinfection of cards and chips will be carried out, and food will not be allowed inside the premises, but players will be given a 60-minute dinner break. Only one seat or table change is permitted per session.

Seminole’s sister property, the Hard Rock Tampa, reopened three weeks ago enforcing the same guidelines. Since resuming operations on May 21, the poker tables at the property have remained full, with lists, according to the Seminole poker team.

Health And Safety Of Players Prioritized

Seminole Hard Rock said the Safe + Sound protocols will be updated on a regular basis, based on the latest facts and data released by industry councils and international agencies.

While players would surely miss the huge crowds, boisterous rail, intense competition, and the vibrant atmosphere during major live poker tournaments that Seminole has played host to over the last 10 years, the management said they will bring back top-notch live action and first-class experience at the felts, “when the time is right“. The company assures everyone that the health and safety of players and staff remain their top priority at this crucial time.