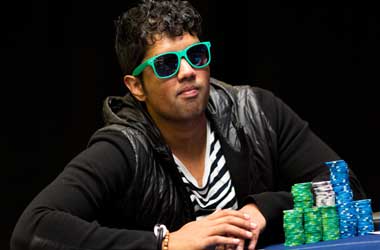 While feelings of inadequacy and fear of failure are familiar to many, for a poker player to talk about it in public is rare. Pratyush Buddiga is a well known poker player on the circuit who has won more than $4 million in career prize money. The poker pro recently opened up on his battles with crippling self-doubt and the fear of failure.

In a heartfelt blog post, Buddiga describes how winning the Scripps National Spelling Bee in 1993 when he was 13 years old, resulted in him setting an “unsustainable standard of perfection” on himself. The win and subsequent honors like meeting the U.S President George Bush, the $12,000 scholarship and appearances in programs like The Today Show, American Morning with Paula Zahn resulted in him falling into the practice of tying up his self-worth and self-esteem to winning and being successful.

In a statement, Buddiga said,

My identity became inextricably tied up in my intelligence. I won the freaking National Spelling Bee —I was supposed to be the guy who had all the answers. My entire life and thoughts were (and are, to this day) centered around avoiding the embarrassment of looking stupid. I had to maintain my image of the genius that everyone admired or my world would come crashing down.

A recent interview with joeingram1

This destructive trait also passed on to his poker games and would trouble him throughout his poker career. After graduating from Duke University, Buddiga decided to play poker for a living. As a beginner, he initially felt no pressure but when he started winning and gaining recognition, the pressure to succeed returned and the same destructive cycle continued.

Everytime he would win a tournament, he would feel on top of the world but when he lost, he would immediately start blaming himself, hating himself and feeling that he was no good.

Buddiga states that each loss chipped away at his image of being a smart lad who had figured out how to win at poker and triggered paralyzing anxiety and self-doubt. A losing streak in 2015 left him loathing himself and he started seeing himself as a bogus poker player who was made out to be better than he really was. A conversation with fellow poker player Kory Kilpatrick fortunately opened his eyes to the self-destructive thinking that was ruling his mind and attempting to destroy his life.

The realization has put Buddiga on a path of healing. He is working on separating his self-worth from his intelligence or accomplishments and being more kind to himself. He wants to reach a place where he will be able to accept failure and see each failure as a chance to practice kindness and mindfulness. Buddiga decided to share his battles with his fans and other poker players in an effort to motivate them and help them overcome similar struggles.