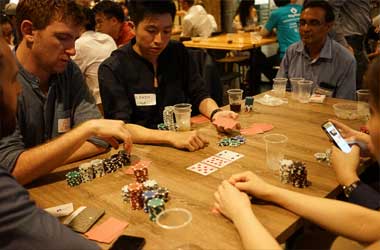 A game of poker has become the favoured networking activity for start-ups in Singapore as entrepreneurs look to mix business and fun according to Vulcan Post, a high-tech news site there.

Taking note of the growing trend, Vulcan Post (VP) decided to host a poker-cum-networking event to explore its potential for such objectives.

The friendly tournament with no gambling was held on Feb. 10 and proved to be a big success with nearly 100 participants. Reports indicate that nine poker tables were active and full.

The design of the event involved players having their business cards on the tables with discussions on investments and business interests encouraged between the participants. The final table was a showdown between 8 players ending in a heads up play that resulted in a winner emerging to grab the trophy. According to VP’s report, attendees were able to enjoy more than a game of poker, using the opportunity to make critical connections.

The trend of poker games as a meeting point has its origins in Silicon Valley’s interest for the game which had been captured by Bloomberg in a video report in 2012.

The report highlighted how several entrepreneurs were passionate amateur players because the game was aligned to their inclination to solve problems using a logical and analytical approach.

Further the game involves quick decision making, risk taking and bluffing all of which appeal to businessmen. Poker gatherings have thus been a popular way in Silicon Valley to bring together venture capitalists, startup entrepreneurs, and high-tech company executives for a night of fun and networking. As pointed out by a poker player Ian Chan, the gatherings often offered opportunities to make important connections.

In a statement, Chan said,

You end up with the scenario where someone will say: you play poker, you’ve got to meet my buddy at Yelp or my buddy at Google.

In fact not just Silicon Valley executives but also executives from Wall Street are known to be avid poker players. One of the most well-known players is casino owner and billionaire Carl Icahn who is said to have paid for his college education with poker winnings. The adoption of poker by entrepreneurs has since then spread to other parts of the world.

Several start-up hubs like Singapore are looking at poker games for holding effective and fun networking sessions. Given the enthusiastic response to its event, VP is considering a rerun of the event.