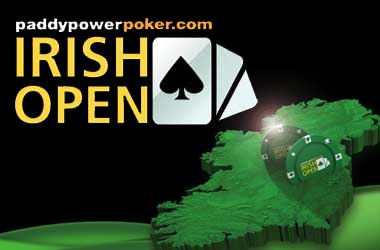 There is a lot of interest each year in the annual Paddy Power Poker Irish Open poker tournament, and this year saw some 505 players signing up to the tournament and sitting down to play in the hope of them picking up the usual generous prize pool for which Paddy Power the sponsor of the tournament are famed for always providing.

These poker players arrived in Dublin in Ireland to play the tournament and looking at the list of these players they came from almost thirty different countries, proving that Paddy Power have a very large spread of players from all over the world.

After the five days were up one player called Ian Simpson who lives in the North of England was crowned the winner of the tournament, and in an unusual show of affective for his girlfriend, possibly due to the large cash payout of 265K Euros he had just won, he got down on one knee and proposed to her on the spot!

The other player who made it to the final two players in the tournament was alongside Ian was Michael Farrelly who lives in Ireland he picked up a very healthy sized second place finishers payout in the tournament of some 141.5K Euros.

Paddy Power have quickly established themselves as a major player in the online gambling world, having started out as a high street bookmaker many moons ago they like many other such betting shop operators have opened up their own online betting sites and complemented it with a range of other online gambling sites.

They now fully own and operate their own Paddy Power Poker and Bingo sites and have a large and very popular suite of casino and gambling games available via their Paddy Power Casino site.

If you fancy becoming next year’s Paddy Poker Irish Open champion then why not visit their poker site and sign up not only will you find lots of free and real money poker games available but plenty of poker tournaments are on offer.