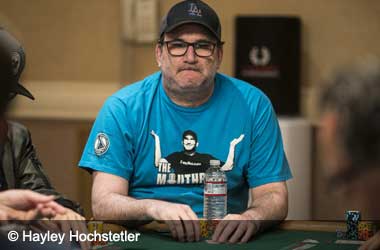 Mike “The Mouth” Matusow has stirred up controversy once again after declaring that his 2021 World Series of Poker (WSOP) run had earned him $26K in profits.

The American poker pro provided some stats on social media regarding his overall performance at the festival, saying he cashed in 11 out of 23 tournaments that he played and reached 3 final tables.

Matusow is one of the world’s most successful poker players and is no stranger to making it big in the WSOP, with four bracelets under his name. However, his recent profit claim has been put into question by eagle-eyed fans who believe Matusow provided the wrong figures.

One commenter noted that if Matusow’s claim was indeed true, then he enjoyed a phenomenal 48% cash rate at the 2021 WSOP, which is great for those who had bought some pieces of his action. But after double-checking Matusow’s stats, poker player Rob ‘Atarirob’ Smith found out that Matusow recorded a profit of just around 8%, which is a huge difference compared to his initial profit claim.

Smith produced a spreadsheet of Matusow’s overall run at the series, which shows that he spent $162,000 in buy-ins across a total of 24 events. He was able to collect $174,736 in winnings which translates to $12,736 in profit, equivalent to an ROI of around 8%. The actual figure could be much lower if Matusow had indulged in rebuys. Matusow already attracted controversy earlier when he charged a 1.5 mark up on a number of bigger buy-in events at the 2021 WSOP, with some saying the high markup is unacceptable.

One commenter pointed out that even if Matusow’s markup is considered unethical, many fans would still buy his action anyway not because they’re expecting to make some huge profits, but mainly because they want to experience the thrill and excitement of being part of the legendary poker pro’s WSOP journey.