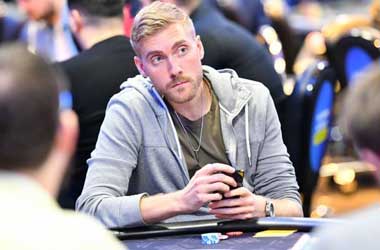 The German poker pro, known online as “Ohio77“, triumphed in Event #2: No-Limit Hold’em Big 500 online bracelet event after outlasting a field of 1,213 players which included some of the best players in the game, such as Phil Galfond and Vanessa Kade, as well as Upeshka De Silva and David Baker who finished 11th and 13th respectively.

Loeser didn’t fold up to the last minute even when he came short in chips multiple times. With the right mix of patience, perseverance, and self-control, the 33-year-old managed to survive every difficult situation and emerged victorious in the end.

Loeser took home $127,153 in first-place prize for his impressive performance.

Loeser’s lucky number appears to be #2 as his first WSOP victory also came in the second online bracelet event of the 2021 series which was a $600 buy-in Monster Stack tournament where he earned $104,313 in top prize.

The final online poker table was made up of nine players, with “ElevatorUp“ and Brandon “BMueller” Mueller becoming the first to be eliminated, courtesy of “omahabrian“. Both finished 9th and 8th for $10,309 and $13,346 respectively.

Next out was Daniel “Utradonk420” Pricola who ran his ace-eight into the pocket kings of “yumyummm“ to finish in 7th place for $17,502. “omahabrian” then scored his third knockout, this time around he finished off Louie “xILoUieIx” Torres in 6th place for $23,176.

The competition got tougher with five players remaining, all of whom had nearly equal chances of claiming the top prize. But not everyone would make it and unfortunately, it was “yumyummm” who had to leave next, taking home $31,008 for his 6th-place finish.

Matthew “WhiteMJ” Hewitt followed “yumyummm” to the rail in 4th place for $47,878, leaving just three players at the table, with Loeser being the shortest stack. The German pro survived that round as it was “tzinhoo“ who busted in 3rd place for $57,142 to set the heads-up play.

The one-on-one battle between Loeser and “omahabrian” didn’t last long as after a few hands, the German poker pro made his victory official, while his opponent settled for second place and collected $78,641.

Loeser has had a great start to the 2022 WSOP and plans to play a number of WSOP events.