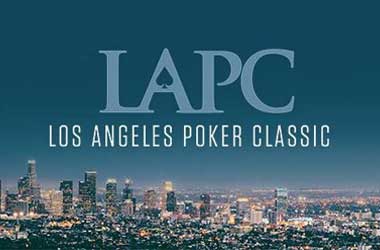 The 2018 Los Angeles Poker Classic (LAPC) started on January 9 and will run until March 1. The LAPC has continued to remain one of the most popular poker tours in the United States and poker players from all over the country have been coming to Los Angeles in droves to participate in this month and a half long poker celebration.

This year’s edition of the LAPC is special because it is the 25th anniversary of the LAPC.

The LAPC is the city’s longest-running poker tournament series and it has been a mainstay of many pro-poker players’ yearly tournament schedule. During the early years of the poker boom, some of the top poker players in the country used to make it a must be play at the LAPC Main Event. The Main Event over the years has been won by the likes of Gus Hansen, Michael Mizrachi, Phil Ivey and Anthony Zinno.

We’re not reinventing ourselves. We’re embracing who we already are: LA’s home for games of skill, pure and simple; a first-rate hotel, minutes away from the hottest spots in LA; and a welcoming environment.

Commerce Casino and the LAPC has put together a number of exciting events and promotions including bringing back a number of traditional LAPC events that give players an opportunity to have a lot of fun on the felt and experience what it was like playing poker back in the day. One example is the Player of the Series (POTS) promotions.

There will be four different POTS and each buy-in will go towards the prize pools for these promotions. An additional $60,000 will be thrown by the Commerce Casino. One POTS will be for No Limit Holdem players, while another will go to mixed game players. The third POTS will judge a combination of these two, while the final one will be for mega satellite players.

There will also be a $350 Buy-In Social Experiment Event, which will have players going back to basics – no headphones, sunglasses, or hoodies to distract other players with. The highlight of the LAPC will be its $10,000 Main Event, where the winner will receive a $1 million and also get a seat at the World Poker Tour final table.