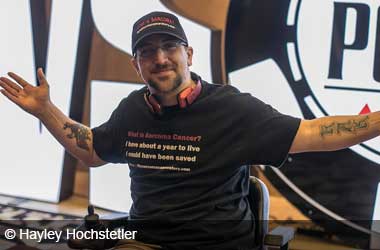 With only a few weeks to live, Kevin Roster is spending his last moments doing what he loves the most – playing poker.

The 36-year-old is taking part in this year’s World Series of Poker (WSOP) in Las Vegas in what would be the final poker tournament of his life. Roster, a semi-professional poker player from New Jersey, is suffering from a rare form of cancer called sarcoma.

He has a dream of winning his first WSOP gold bracelet and a nice chunk of cash that he can leave to his son before he says goodbye for good. Roster is also keen on utilizing his final days at the WSOP for a more meaningful reason: he wants to raise awareness on the deadly disease that left his health in total disrepair and also advocate for assisted death.

A New Jersey native, Roster moved to California and this is where he plans to die peacefully with help from a doctor. While he acknowledged that physician-assisted death is a controversial subject, Roster believes every human being should have the legal right to end needless suffering.

California is among a handful of states allowing euthanasia. While the practice will be made legal in New Jersey by August 2019, Roster will not live that long, based on his latest medical results. The hyper-aggressive cancer resulted in the amputation of his left leg in April and rapidly spread throughout his body. Doctors said he only has weeks to live.

Prior to his cancer diagnosis, Roster was living the good life being a semi-professional poker player and running a profitable collectibles business with his wife. They have a son who is now nine years old.

A native of Queens, New York, Roster spent the early 2000s playing poker in the city’s underground poker scene. He also played online before internet poker was banned in the US in 2009. It’s always been Roster’s dream to capture a WSOP gold bracelet. This year is his final chance to achieve that goal so he’s giving it his all.

The 36-year-old wants to put his message across by wearing a special T-shirt while playing in the tournament, with the front and back portion of the shirt outlining a number of facts and figures about sarcoma, including a link to his website. Roster also hopes someone would sponsor him into the $10,000 Main Event which is set to take place in July.

If his bracelet wish is fulfilled, Roster said he would probably wear it till the last minute and then leave it to his son.