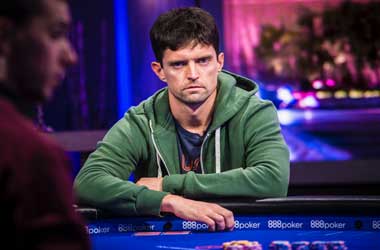 The biggest buy-in event of the 2019 World Series of Poker (WSOP) was won by American poker pro Keith Tilston.

Tilston entered the final day as the only player without a bracelet but he did not let any of those factors play on his mind as he put together a fantastic period of play that helped his reach one of the most important milestone of his career so far.

The final action kicked off with the short-stacked Negreanu doubling twice in quick progression. He managed to move up to second in chip counts and stayed there for a bit before going down again after losing some of his chips to Igor Kurganov for a failed bluff.

The first two players to leave the final table were Christoph Vogelsang who finished in 8th place for $281,025 and Sergi Reixach who finished 7th for $353,202. After the first break of the day, the curtain close for Dominik Nitsche who finished 6th for $457,772. The four-time bracelet winner hit the rail after Kurganov rivered a three-outer. Nitsche was quickly followed by Brandon Adams in 5th place for $611,258.

With four players remaining, Negreanu scored a double for the third time with ace-eight against Kurganov’s king-queen. The latter was eventually eliminated by Tilston in 4th place for $840,183. Nick Schulman went soon after as he was left with less than two big blinds after Negreanu doubled through him twice. He took home $1,187,802 for his third-place finish.

Tilston was slightly behind Negreanu in chips when heads-up play started. The Canadian pro increased his lead during the initial stages of play, but Tilston would not give in and closed the gap after a calling a shove from Negreanu. The latter managed to regain his lead, but the crucial hand came when Tilston was able to win a decisive pot, giving him a significant chip advantage by the time the final hand was dealt.

Negreanu went all-in with ace-deuce against Tilston’s queen-jack. It looked like Negreanu would score his sixth double, but Tilston’s rivered pair of jacks blocked his way into winning his seventh bracelet. Negreanu walked away with $1,725,838 for his second place finish.