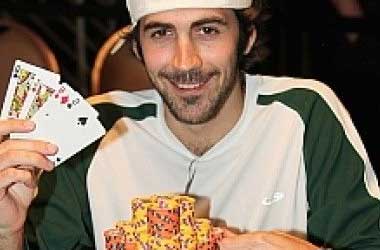 Jason Mercier has made a victorious comeback two years after his last major tournament win.

Mercier topped a field of 41 entries in the two-day single re-entry high stakes event which generated a massive prize pool of $1,988,500, making it the largest $50K event in the history of the Seminole Hard Rock Hollywood casino.

In 2017, Mercier also won the $25K SHRPO High Roller, after which he decided to take a step back from poker to focus on parenthood. His wife Natasha was seven months pregnant with their first-born when Mercier took down the event, and ironically, the poker pro captured the $50K SHRPO High Roller event with Natasha also being seven-months pregnant with their second baby.

Mercier entered the final day holding a significant chip lead, with his stack of 132 big blinds nearly five times larger than the second biggest stack held by Giuseppe Iadisernia. Mercier was responsible for the first elimination of the day after calling Albert Daher‘s all-in with A-10 against the latter’s K-Q. Daher exited in 7th place for $79,540.

The next player to leave the table was Sam Sweilem who got all-in with 5h4d but failed to improve after the turn, eventually losing the hand to Iadisernia. Sweilem earned $109,370 for his 6th place finish.

Mercier eliminated yet another player from the final table and this time it was Manig Loeser who busted in 5th place after losing his Kd9d against Mercier’s pair of eights. Loeser took home $139,195. Loeser was followed by Iadisernia who ended his bid in 4th place for $198,850 after losing his A-9 against Franklin Fok’s A-Q.

Thomas Boivin triumphed in his first two all-in showdown against Mercier but eventually succumbed to Fok in his third all-in attempt. Boivin was eliminated in 3rd place for $288,330.

Mercier was dominating the chips 7-to-1 when he entered heads-up play against Fok which lasted only nine hands. The last deal saw Fok receiving AsJs on the button. He limped in for 25,000, while Mercier had 5d5c and shoved. Fok called and got all his remaining chips in the middle, but failed to find help on the board, which made Mercier’s victory official. Fok walked away with $457,355 for his second place finish.

Jason Mercier now has a little over $19.6 million in career prize money and is in 26th place on the All Time Money list.