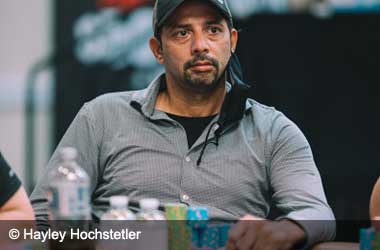 Raj Vohra emerged victorious after outclassing a massive field of 5,715 players in Event #11:$600 No-Limit Hold’em Deepstack at the ongoing 2022 World Series of Poker (WSOP) live festival at Bally’s and Paris in Las Vegas. That win gave the Florida native his first-ever gold bracelet along with $335,886 in prize money.

Before developing an interest and passion for poker, Vohra was a tennis player. The career shift proved to be the right decision as he has achieved quite a lot playing at the tables during the last few years.

Prior to his bracelet victory, Vohra had amassed nearly $1.4 million in live cashes and while that in itself is already a huge accomplishment, joining the WSOP champions club brings about a different level of fulfillment. For Vohra, it’s a dream come true and the best moment of his life.

During his post-win interview, Vohra, who was accompanied by his supportive wife during the tournament, shared that they almost cancelled their Las Vegas trip amid the continuing threat of the COVID-19 pandemic. The $600 Deepstack event wasn’t also his main focus in his 2022 WSOP schedule but it ended up earning him his first WSOP title.

Vohra doesn’t usually play events with buy-ins of $600 but after his win, the poker pro admitted he’d like to play some more.

When the final table began, Vohra was eighth in chips but he was able to navigate his way to victory and patience has a lot to do with that. Vohra said his strategy revolved around picking out his spots and waiting for the right moment and it worked for him.

Vohra and his heads-up opponent Qing Liu were nearly even in chips when the final action got underway. The game was too close to call until Liu went all-in with pocket eights versus the ace-king of Vohra. At that point, both players had an equal shot at victory, but luck sided with Vohra as he eventually turned an ace to win the tournament and claim his maiden bracelet. Qing Liu finished second for $207,192.